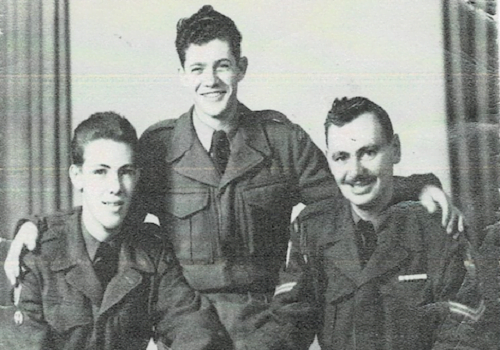 To everyone who’s gone through the Canadian Forces School of Communication and Electronics (CFSCE), you would’ve gone to the Communication and Electronics (C&E) Museum at least once. Within, there is a name mentioned several times – Sgt (Ret’d) Edward Allan Buckner, a veteran mentioned in dispatches (MiD) for his service and meritorious actions in the Korean War. Though he is honoured through the museum displays, Tim Cook reminded us in The Secret History of Soldiers that we must remember them as more than “black-and-white figures of photographs and films, but as vibrant young men full of life, colour, jokes, and pranks.” Thanks to Major Justin Yoo at CFSCE, and his inclusion of junior officers in the initiative to do more for our Korean War veterans, I had the privilege in virtually interviewing Sgt Buckner on 24 May 2020.

Born on 23 March 1932 in Toronto, Ontario, Edward Allan Buckner grew up in a large family of both Scottish and Irish ethnicity. He was the son of a World War I veteran who served with the 44th Lincoln and Welland Regiment. When he was looking for a job, the fact that he was a cadet gave him all the reasons he needed to join the army. Little did he know, he would be serving one year in one of the most destructive wars in modern history with many civilian and military casualties. 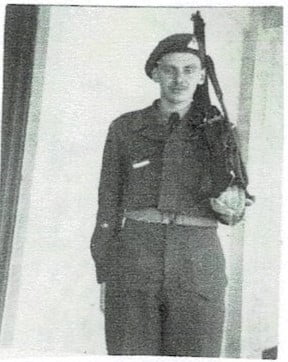 Dress of the day

One month short of being 18, Sgt Buckner joined the army as a signaller in February 1950 with his parents’ permission. He attended both basic and trade training at the Vimy Barracks right here in Kingston. Due to the measles outbreak in the 1950s, and no vaccine, Sgt Buckner had to quarantine prior to training; a very similar situation to what military trainees today are experiencing due to the COVID-19 pandemic. Unfortunately, because there were three separate occasions where his fellow course mates caught the measles, the quarantine kept on restarting until everyone was healthy. After completing basic training with Troop K23, the Sgt went on the Operator Wireless and Line Course, where he learned how to handle 19-29-52 sets, the switchboard, the teletype, and morse code. Once he reached the operationally functional point (OFP), an unimaginable happening occurred. The Base Commander came by to talk to the troops, and asked for volunteers to go to Korea. Since there was no internet, no Facebook, and no Google Maps, there was no way the troops could find out anything about the country or the war – but as eager trained soldiers, every single person said yes. After a medical exam, a bunch of immunization shots, and a 3-day leave pass, all of them left Kingston to board a train to Fort Lewis in Washington to start their pre-deployment training.

Sgt Buckner’s Troop in Fort Lewis was a part of the 25th Infantry Brigade Signal Squadron, the one that would support the Princess Patricia’s Canadian Light Infantry (PPCLI). They trained for 6 months, rehearsing command post (CP) routines as they needed to run the signal office 24/7 in Korea. Busy as he was, he learned a few things during training that weren’t quite related to his job: “how to play Canasta, how crazy a person could get from drinking a whole bottle of cheap Catawba wine (wasn’t the Sgt), and how angry an officer could get from a signaller calling another corporal by his first name across the road in the presence of an officer.” 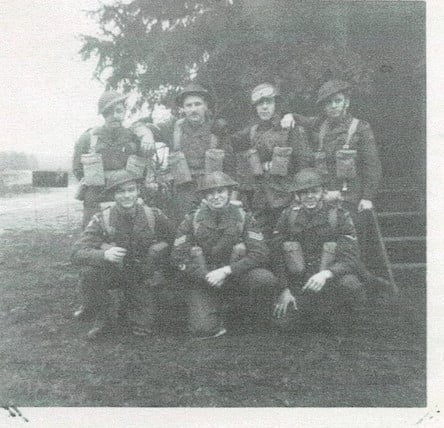 Other than learning about some officers’ temper, he had several things that kept his morale high: food, pay, and some sightseeing. Him and his mates were well fed, and as a bonus, the cook even showed them how to prepare an “egg-in-a-hole” during the night shifts and told them they could eat as many of them as they wanted. For their pay, with the extra living cost allowance and the exchange rate where the Canadian dollar was better (which everybody must miss right now), Sgt Buckner ended up getting a pay bump from $99.00 to $125.00 ($1,100 to $1,400 in today’s dollars). He couldn’t go too far for sightseeing, but he went to visit Tacoma, Seattle, and Victoria.

After the pre-deployment training, the troops travelled to Busan, Korea on the US naval ship, the Marine Adder, with the Royal 22nd Regiment (R22R). Sgt Buckner said he enjoyed the trip because he didn’t get seasick – added that meals were “pretty good” too. Considering where he had to sleep though, it was a bit surprising that the trip left a good memory. His room was located in the farthest forward and lowest part of the ship. There was a lot of movement and it caused many of his friends to get seasick. The worst part was that toilets were in front of his room …when the weather got bad, they splashed all over, stinking up the whole area. To avoid this, the Sgt simply went up to the deck whenever he could. 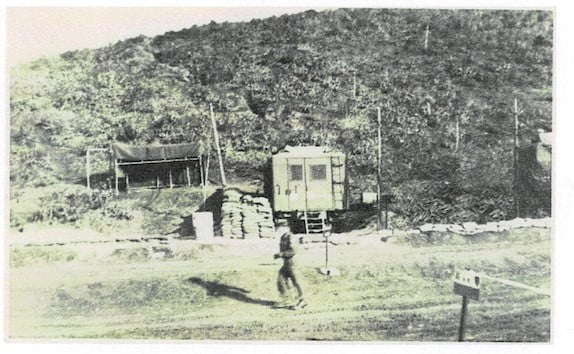 Once he arrived in Korea, he stayed in the camp outside of Busan for about 2 months to organize, setup, and train. He also learned a few Korean words, just enough to put calls through to the Brigadier General. After the preparation phase, the brigade’s main CP, where Sgt Buckner was assigned to, moved up to the front lines, constantly “leap frogging” with the forward CP. To confuse the enemy on how many Canadians were in the area, the CPs only stayed in one place long enough to establish a presence before quickly moving to another site. Considering how mountainous the entire Korean peninsula was, this was not an easy task. One time, the main CP actually moved ahead of the forward one, which confused the officer in charge. Because he wasn’t sure exactly where they were supposed to setup, Sgt Buckner stuck his head out of his vehicle to ask a few soldiers walking on the road where they came from – just to be told they came from exactly the same place they were leaving from. In simple terms, they were lost. With the sun coming down fast, the decision was made to stay in place for the night, which was within a valley where one could hear fire exchange from both sides of the hills. Though they were protected by their armored escort (tanks from the Lord Strathcona’s Horse), and many sentries, none could sleep, staying under any vehicle they found available. Nothing was unpacked but a radio. 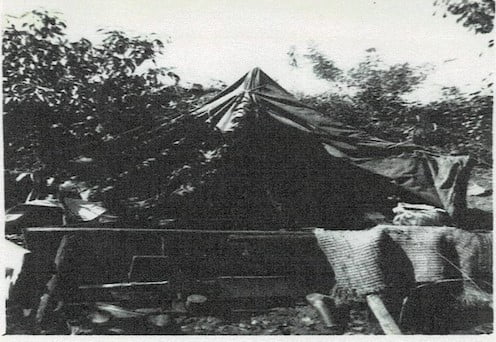 In the one year Sgt Buckner was in Korea, he only saw the mobile laundry and bath unit (MLBU) twice. The unit had a simple process: “After you set up near a clean water source, you enter in one end, remove and give your dirty clothes to somebody, shower, and get new clothes when you exit.”[1] The problem was that the MLBU was very sensitive to temperature. As such, it only came by during relatively warm weather, which didn’t happen too often (the Korean peninsula could get as cold as Canada). Rather than complaining about it though, the Sgt and his friends got creative. With no heaters, they “made stoves out of ammunition boxes, chimney out of artillery shell covers, and base plates from 25lb shells.”[2] They truly made things work with whatever they had. 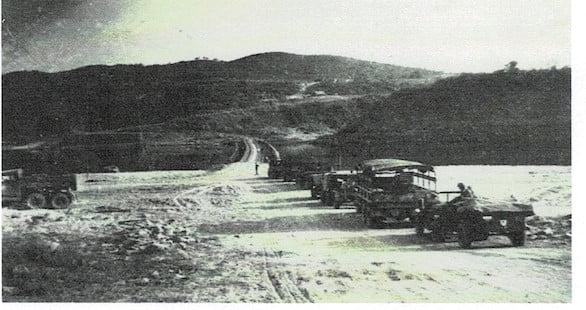 When the 25th Infantry Brigade became a part of the 1st Commonwealth Division, his squadron was reduced to a Troop. With the reduced size, the Sgt spent time in different units from the UK, Australia, and New Zealand. One thing to note: he really loved the American rations compared to the British ones. For example, with the American rations, he had ham and eggs for breakfast, and bangers and mash for the other meals. Also, they contained a piece of candy and a cigarette. Fortunately, it wasn’t only food that kept him going during the war; after a 6-month tour, the troops were given 1 week of leave in Japan. As Sgt Buckner volunteered for another 6 months, he had the chance to go to Japan twice. Looked quite happy judging by the photos.

Following the countless hours in the CP and the foxholes, he left for Canada in September 1953 – the Korean Armistice Agreement was signed a couple months prior in July. Upon his return, after a short break from the army, he taught at CFSCE in 2 Squadron. After an unfortunate series of events, he decided to leave the military to join the North York Police force. He is currently residing in Amherstview. 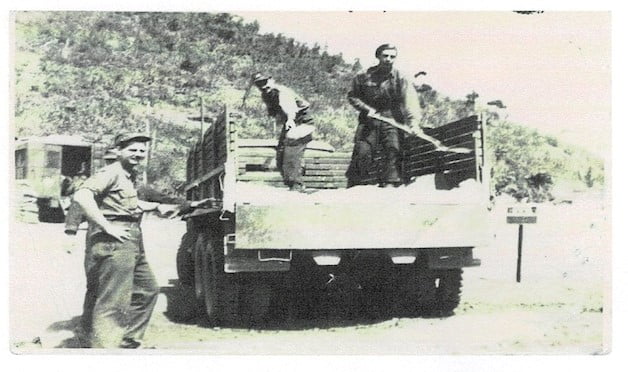 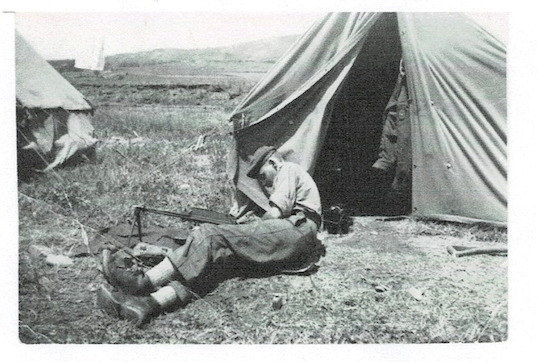 In conclusion, as serving members, let us listen and remember not only what our veterans did but also who they were. Like other wars on foreign soil, many Canadians didn’t make it home and are now resting in the United Nations Memorial Cemetery in Busan, South Korea. We have the fortunate privilege to have someone like Sgt (Ret’d) Buckner living right here in Kingston to tell us stories that should be remembered. No matter how busy we may be, we should be giving our veterans some of our time, for they remind us that the soldiers’ culture in the front line is “as important to winning the war as weapons, leadership, and tactics.”[3] 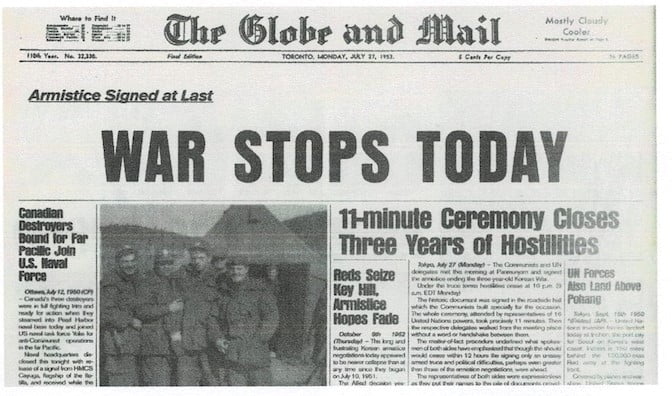