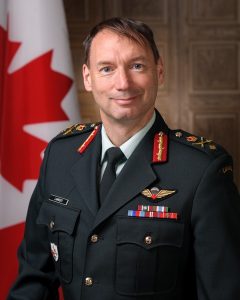 Brigadier General D.J. Lambert joined the Canadian Forces in 1986 to attend Royal Military College of Canada (RMC) Kingston and graduated in 1991 with a degree in mechanical engineering. After two years as a strategic headquarters staff officer, he was promoted to the rank of Captain in 1994 and was posted to Valcartier where he was employed in a variety of positions in 5 GBMC Headquarters and Signal Squadron and with the 1st Battalion, Royal 22e Regiment. While serving with 1 R22eR in 1996, he deployed on a United Nation mission in Haiti, serving as the Canadian Contingent signal officer.

After his promotion to Major in 2001, Brigadier General Lambert completed a Master degree in Business Administration from Laval University and was thereafter assigned to Ottawa as a staff officer in Army headquarters. In June 2006, he was appointed the Commanding Officer of 2 CMBG Headquarters and Signal Squadron in Petawawa, Ontario. This command appointment was followed in May 2008 by a deployment to Kandahar, Afghanistan, as the Canadian Joint Task Force J6, where he was promoted to the rank of Lieutenant-Colonel.

In 2009, Brigadier General Lambert was assigned to the US Army Command and General Staff College in Fort Leavenworth, Kansas. After two years of education in a joint and multinational environment, he graduated from the US Army School of Advanced Military Studies with a Masters in military art and science, and was posted to Kingston first as G6 of the Land Force Doctrine and Training System, and then as directing staff in the Canadian Army Command and Staff College. In 2013, Brigadier General Lambert was appointed the Commandant of the Canadian Forces School of Communications and Electronics.

Promoted to Colonel in 2015, Brigadier General Lambert first served as the Chief of Staff of the Canadian Army Doctrine and Training Centre, and was appointed Commander 7 Communication Group in 2016. At the end of his command tour in 2018 he attended the Senior Course at the NATO Defense College in Rome, and was thereafter employed as the Deputy Director General Cyberspace.

Brigadier General Lambert is married to an Army Lieutenant-Colonel in the logistics branch. They have two beautiful daughters. He practices all sports and particularly enjoys competitive running and golf, and serves as the Patron of CAF men’s basketball. He loves reading and has a significant interest in history.