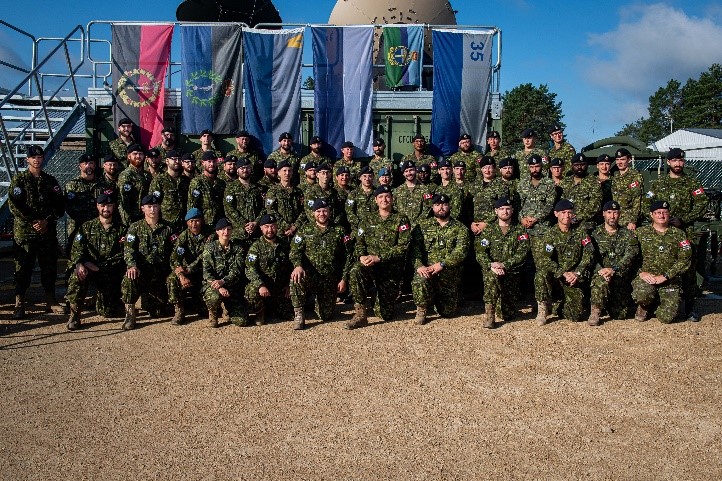 In the sweltering heat of 15 July 2021, Roto 21-02 members from various units across Canada including 5 CMBG, 77 Line Regt, CFJSR, 21 EW and 35th Trans Regt participated in the parade for the transfer of command authority (TOCA) proudly accompanied by the outgoing roto 21-01. It was with thanks to the families and friends of deployed military personnel that Major Chapman was handed command of the Signal Squadron by Major Boudreau.

During the first few weeks, the Signal Squadron was eager to provide the necessary support to new arrivals while continuing to provide unwavering IT support in garrison. Thanks to quality service, the many users were able to see their technical problems resolved in the shortest possible time. Each week, dozens of requests were successfully completed by the support team.
The Signal Squadron always cares about the physical and mental health of its members. With this in mind, the squadron members organized several team sports, which greatly contributed to the cohesion and morale of the members. Having the opportunity to participate in a variety of sports, staff were able to bond with members of allied nations, forming new friendships.

It was with high morale and a desire to discover that we arrived in Latvia, a warm and proud nation. It is with everyone’s support that the squadron is ready to face the new challenges ahead, which will allow them to grow professionally and personally. In these times of pandemic, Signal Squadron has the opportunity to apply their know-how in partnership with Latvians and NATO nations, while promoting the Royal Canadian Signal Corps (RCCS).