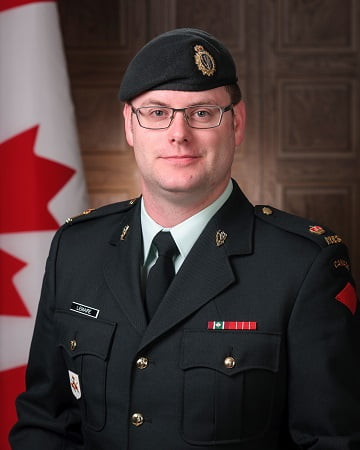 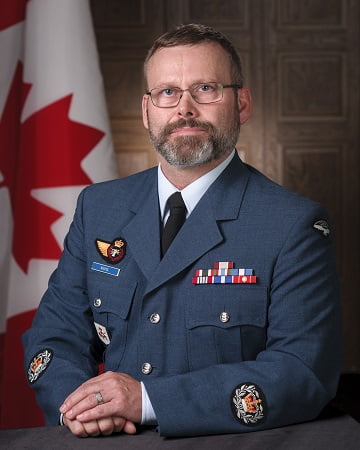 Major Louis A.J. Lemaire joined the Canadian Forces in 2003 and enrolled in the Computer Software Engineering program at the Royal Military College in Kingston, Ontario. He graduated the Bachelor of Computer Engineering program in 2007 and upon completion of Basic Signal Officer Training was posted to 2 Area Support Group Signal Squadron in Petawawa, Ontario.

Major Lemaire (then a Lieutenant) spent a year at the garrison signal squadron as a troop commander, including an attach posting at Land Force Central Area Training Centre in Meaford, Ontario as the Signal Officer. In the summer of 2008, he was posted to 2 Canadian Mechanized Brigade Group Headquarters and Signal Squadron as the Information Systems Troop Commander.

Major Lemaire was promoted to Captain and remained in this position, completing pre-deployment training and deploying on Op ATHENA in August 2010, as a member of Joint Task Force Afghanistan Headquarters rotation 5-10. As part of Task Force 5-10, he served as the Communication and Information Systems Troop Commander with 76 soldiers and 3 civilians under his command. In this role, he and his team were responsible for the operation and maintenance of tactical communications systems that spanned across Kandahar province.

Upon his return from theatre in July 2011, Major Lemaire was posted to 72 Communication Group Headquarters in Halifax, Nova Scotia. He served as the Regular Force Advisor and Adjutant of 723 (Halifax) Communication Squadron as part of 36 Canadian Brigade Group. In January 2012, he became Operations Officer of the newly formed 36 Signal Regiment. He stayed an additional two years in Halifax at the 5th Canadian Division Headquarters as the G6 Operations Officer.
Major Lemaire was promoted to his current rank in 2015 and posted to Ottawa, where he served as the Deputy Project Director for Satellite Communications projects. In that role, he worked on Tactical Narrowband and Arctic Satellite Communications projects for the Royal Canadian Air Force.

Major Lemaire resides in Kingston, and enjoys reading, board games, and travelling. He and his wife, Captain Kim Lemaire, a Public Affairs Officer, have two children Alexandra (3) and Lucien (1).

MWO Steven Nichol was born in Grand Falls New Brunswick. He enrolled in the Canadian Forces in November 1987 as a Lineman. After completion of his basic training in Cornwallis, NS, he completed his driver training course and Land Tactical Training (LTT) at CFB Borden in Feb 1988. This training was followed by his Lineman TQ3 at Canadian Forces School of Communications and Electronics (CFSCE), at CFB Kingston. He graduated in Aug 1988 and was posted to SSF HQ & Sigs, Petawawa.

In 2002 MWO Nichol completed an occupational transfer to Air Telecommunication and Information Systems Technician (ATIS Tech). In October 2003, after graduating ATIS QL3 he was posted to CFB Trenton, at the Aerospace and Telecommunications Engineering Support Squadron (ATESS).

In 2011, he was promoted to Sgt, and posted to Thunder Bay, Ontario as a recruiter. In 2013 he was posted to Ottawa to Canadian Forces Network Operations Centre as a Technical Security Inspection Team member. In 2015 he received a promotion to the rank WO and posted to Chief of Force Development Cyber. During his time in Ottawa, he deployed to OP IMPACT in Iraq.

In 2018 he was promoted to MWO and posted to CFSCE in Kingston, as the Squadron Sergeant-Major (SSM) of 3 Squadron and Senior Trade Advisor for ATIS, responsible for Communications Technician training for Army and Air Force personnel.