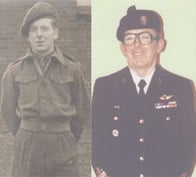 Born September 11, 1927, in Clara Co. Offaly, Eire. Passed away June 30th, 2018. It is with heartbreaking sadness that the passing is announced of Bernard “Paddy” Walshe. Predeceased by his beloved wife Barbara, mother Esther, father Peter, brother Patrick and little sister Mary-Jane. Devoted father of Debbie. Cherished grandfather of Alanna, Lance, and Garreth. Leaves to mourn also his son-in-law Keith, numerous family members in Ireland and England, and many friends and colleagues in Canada. Paddy was a soldier, as he always reminded everyone of having served for several years in the British Army, prior to joining the Canadian Armed Forces in 1954. He retired in 1982 as a Chief Warrant Officer, whereupon he embarked on his next “Career”, as a guard for nearly twenty years for the RCMP-Maple Ridge Detachment. Paddy was an extremely avid runner, sometimes being stopped as he ran by the RCMP for “Speeding”. Paddy was a proud member of the Royal Canadian Legion, Branch 88, in Maple Ridge. He was the epitome of the word “Decent”, and was truly “one of a kind”. He will be sorely missed. Graveside prayers and interment to be held on Thursday, July 12th at 1:00pm, in the Maple Ridge Cemetery. Please no flowers, but if you would like, a donation to the Royal Canadian Legion, Branch 88, in Paddy’s name would be greatly appreciated.