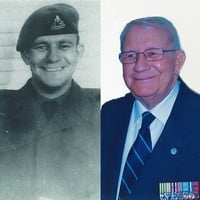 WILSON, Robert James –  MWO R.J. Wilson CD (RET) RCSigs after a long illness at the Glen Stor Dun Lodge, Cornwall on Thursday March 22, 2018 at the age of 90 years.  Beloved husband of 61 years to Angela (née Bembenneck) Wilson. Loving father of James (Linda) of Sylvan Lake, Alberta. Sadly, missed by his grandson Aidan Robert Wilson.  Predeceased by his parents Robert T. Wilson and Agnes (née Emberg) Wilson.  Dear brother of Ronald Wilson (late Claire) of Cornwall. Predeceased by his brothers Percy and Douglas (late Louise). Also, survived by many nieces and nephews.  Born in Lancaster, where he was known as “Sonny”, Jim went on to proudly serve in the Canadian Armed Forces for 30 years.  He had several theatres of service, but most notably Korea (UN), Germany (NATO), and Cyprus (UN), along with numerous postings in Canada.  After retirement, he returned to Cornwall where he joined the staff of Cornwall and Area Housing for a period of twelve and a half years.  He had a voracious appetite for history and genealogy.  Jim had a great wit and his storytelling will be missed by all.  Resting at the Wilson Funeral Home, 822 Pitt Street, Cornwall where visitation will be held on Sunday from 7-9 PM and Monday from 9-10:45 AM. The Liturgy of the Word will be celebrated in the chapel of the Wilson Funeral Home on Monday March 26, 2018 at 11:00 AM. Rite of Committal at a later date in St. Raphael’s Parish Cemetery, South Glengarry, Ontario. If so desired, contributions in his memory to the University of Ottawa Heart Institute 40 Ruskin St, Ottawa, ON K1Y 4W7 (www.ottawaheart.ca) would be appreciated by the family. Online messages of condolence may be made in the obituary section of: www.wilsonfuneralhome.ca