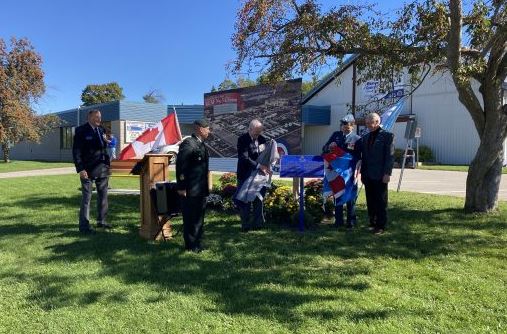 By Denny Scott, The Huron Citizen

After years of planning and a one-year delay due to COVID-19, Canadian Forces Base (CFB) Clinton was honoured on the weekend with a historical plaque, marking the site’s importance in the military history of the country.

The event, which came together thanks to the efforts of the Canadian Forces Communications and Electronics Association, the Vimy Officers’ Mess at CFB Kingston, Veterans Affairs Canada, the late Jan Hawley and current and past Huron East Council and staff, saw a plaque placed in front of the Vanastra Recreation Centre on Sunday. The plaque details a brief history of the base and its importance to the community. The site, among other things, was home to the base church. 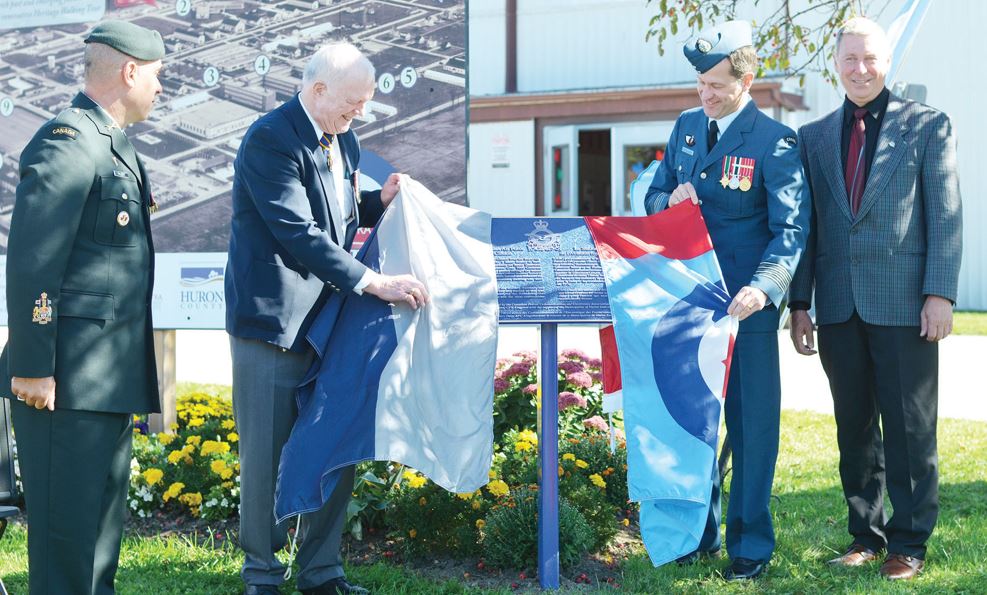 The event started with a parade including colour parties from local Legion branches and the pipe bands from the Clinton and Brussels branches of the Legion.

Retired Lieutenant Colonel Tony Charters of the association emceed the event, welcoming a number of special guest speakers as well as Royal Canadian Legion members from a number of local branches, and the community at large. 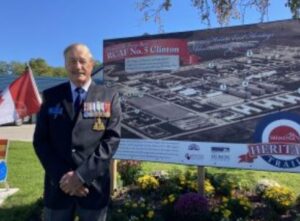 He said that the genesis of the event could be traced back to Retired Brigadier-General Kevin O’Keefe, who suggested something be erected to mark the importance of CFB Clinton.
“Clinton is the home of RADAR,” Charters said. “We should have something here.”

He said that O’Keefe worked with Hawley to secure funding and have the plaque produced and, while it was unveiled over the weekend, it was actually dated last year as that was when the event was originally slated to take place.

Charters explained that Sunday marked not only the special event in Clinton, but also the Battle of Britain Day, marking the 81st anniversary of a decisive victory of the Royal Air Force over the German Luftwaffe.

Huron East Mayor Bernie McLellan was the first dignitary welcomed to speak at the announcement, and took his time to explain how much Hawley loved Vanastra, and how hard she worked to help show what made the community, which was built on the former CFB Clinton, special. He made a point of thanking the local Lions Club for the donation of a bench in Hawley’s honour.

Next, the President of the Communications and Electronics Association, Retired Major General John Leech spoke, detailing the history of the base, from its creation as a Royal Air Force training station in 1941 to becoming part of the Royal Canadian Air Force in 1943 and finally its closure in 1971 as part of the unification of the armed services. He also detailed the work of the association and its over 7,500 members, highlighting the historic efforts the group maintains.

He thanked all the individuals and organizations involved, saying the plaque marks a major part of the association and the country’s history, honouring all those who trained and worked at the base.

Next, Royal Canadian Legion Ontario Command District C Commander Eric Ross spoke, detailing his own family history with the base, as his uncle had trained there. He also noted that the 50th anniversary of the closing of the base was only one milestone being observed this year, including the 100th anniversary of the poppy being used to honour fallen soldiers.
Huron-Bruce MP Ben Lobb spoke next, saying that, with the colour parties and pipe bands, it felt like being taken back in time to when parades would have been a regular occurrence at the base.

He thanked the veterans, the Legions and Huron East for hosting the event and honouring the history of the community.
Huron-Bruce MPP Lisa Thompson also noted the importance of the history being honoured that day, saying that both it and the service that those trained at the base provided matters. She said the plaque was a page in local history.

The keynote speaker for the event was Retired Brigadier General Michel Charron, who had spent some time at the base during his military career. He said he was honored to be at the event and felt the historic trail that Huron East created through the former CFB showed the solid relationship of the base and the surrounding communities. Charron explained the plaque marked a milestone in the history of the RCAF, but at first spoke more to the history of the people at the base than the base itself. He came to the base near the end of its life cycle, and remembers that the base offered great living quarters, but that many of his friends were newly married and lived off the base, and that the communities respected them. Charron spoke to the realities of life on the base, as well as giving an overview of how the base came to be there and how important it was to the World War II effort.

He said it was impressive how the tiny village of Clinton, with a population of 2,000, turned out over 7,000 graduates from both the United States and Canada in four years, and impressed its students from the United States so much that the base style was adopted south of the border.

The work of the graduates of the base was instrumental, he said, in the organizations that followed through to modernity.
After Charron gave a preview of the inscription of the plaque, which was still under cover, two Harvard aircraft, from the Canadian Harvard Association, did a flyby of the site, passing over three times. The plaque was then unveiled and the assembled speakers and dignitaries took a tour of the former air base.

The inscription on the plaque, in both English and French, reads as follows:
Royal Canadian Air Force Station Clinton
The RCAF took over Station Clinton from the Royal Air Force in 1943 and created No. 5 Radio School to train officers, technicians and operators on Radio Detection and Ranging (RADAR) systems. Over 7,000 Canadian and Allied service personnel passed through the school during [World War 2]. In 1945, Station Clinton became home to No. 1 Radar and Communications School and remained the primary radar and communications training site until it closed in 1971.
This plaque is dedicated to the military members and civilian employees who served and trained at this site. It also serves as a reminder of the friendship that existed between the station and the local communities.
Dedicated by the Canadian Forces Communication and Electronics Association and the Vimy Officers’ Mess, CFB Kingston with the support of the Municipality of Huron East on 02 May 2020.

Read more on the topic here: Remembering the Canadian Forces in Vanastra