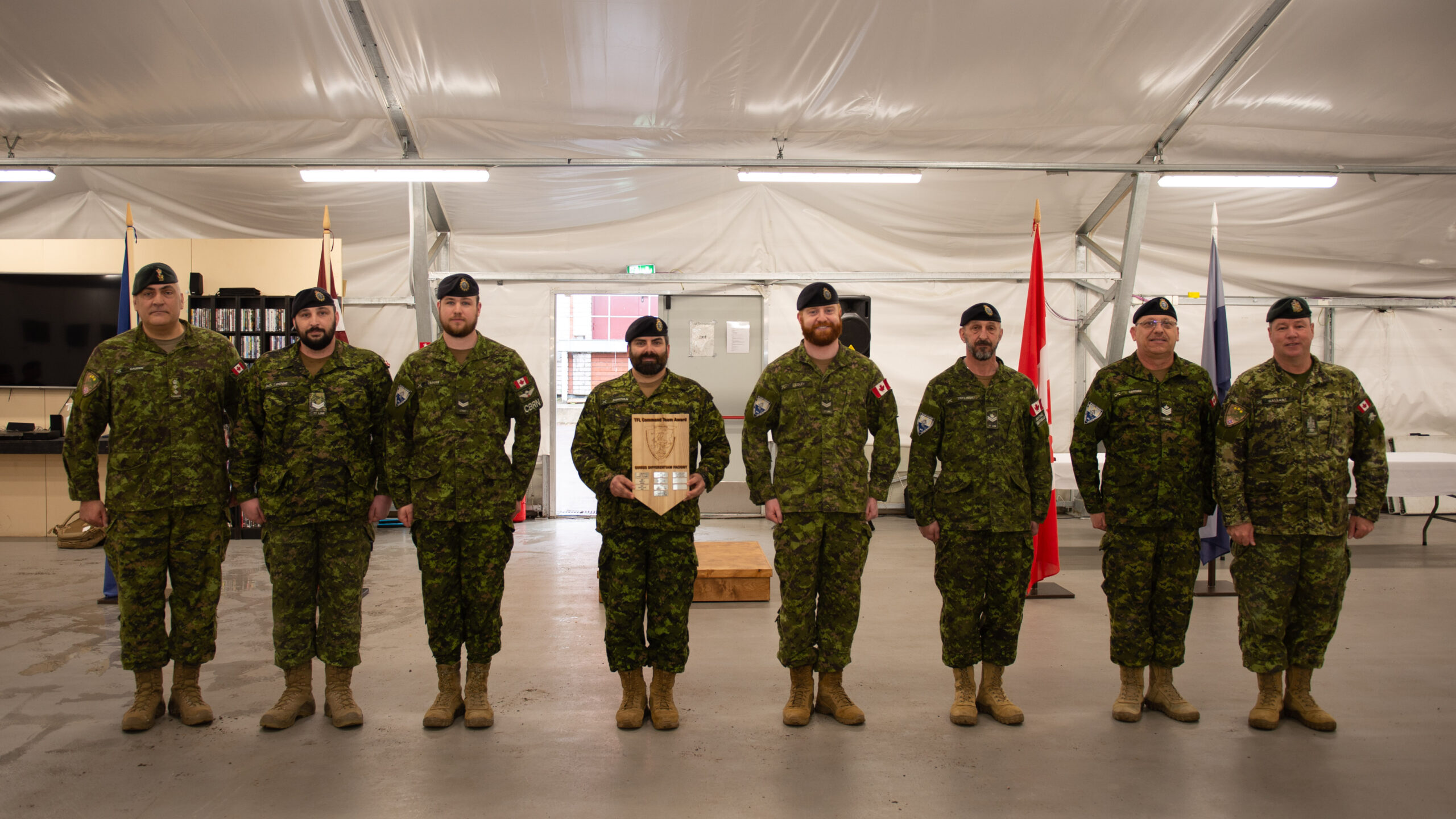 To recognize Sqn members’ accomplishment and performance throughout OP REASSURANCE, the TFL Command Team handed out various TFL awards to members of the Sig Sqn on 20 May 2022.

The recipients are as follows: 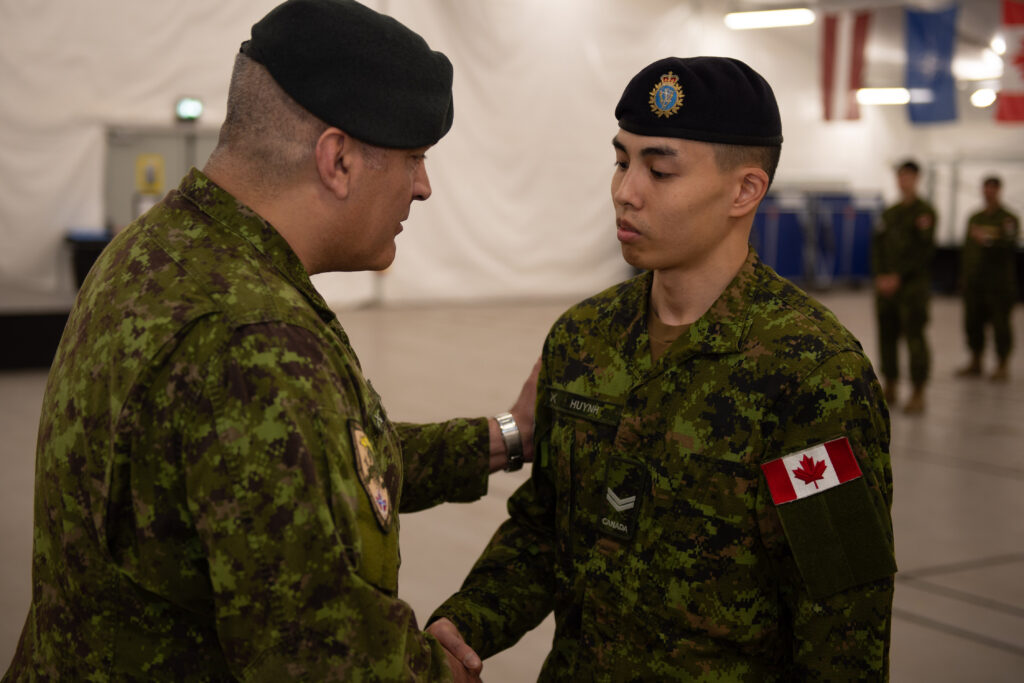 “Cpl Huynh was deployed from 9 Dec 21 to 13 Jun 22 as part of the Signal Squadron and employed as part of the TFL HQ Service Desk Team. During his tenure, there was a notable increase in service to the HQ. Cpl Huynh efforts were key in software updates to TFL HQ Secure Video Teleconferencing System, improving TFL HQ’s ability to connect with CJOC HQ and other agencies.” 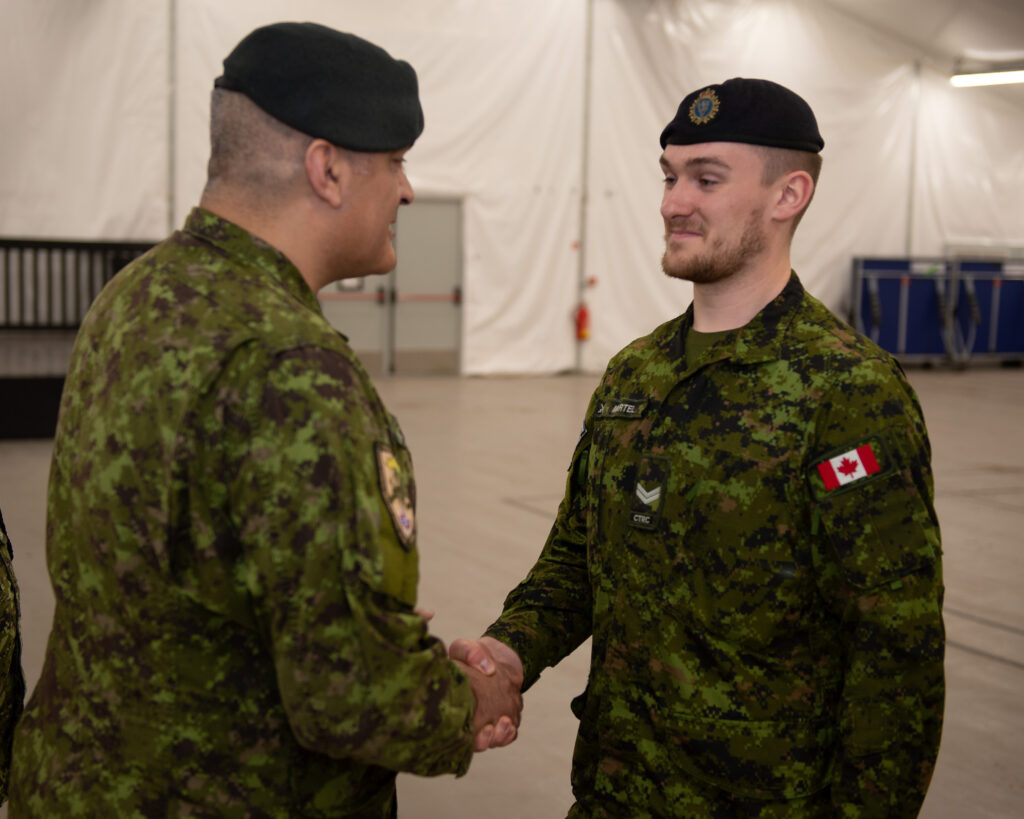 “Cpl Martel was deployed from 9 Dec 21 to 13 Jun 22 as part of the Signal Squadron and employed as part of the TFL HQ Service Desk Team. His tenure within TFL HQ resulted in a significant improvement in timelines for the creation of user accounts. This resulted in reduced downtime for newly arriving staff members and increased TFL HQ output.” 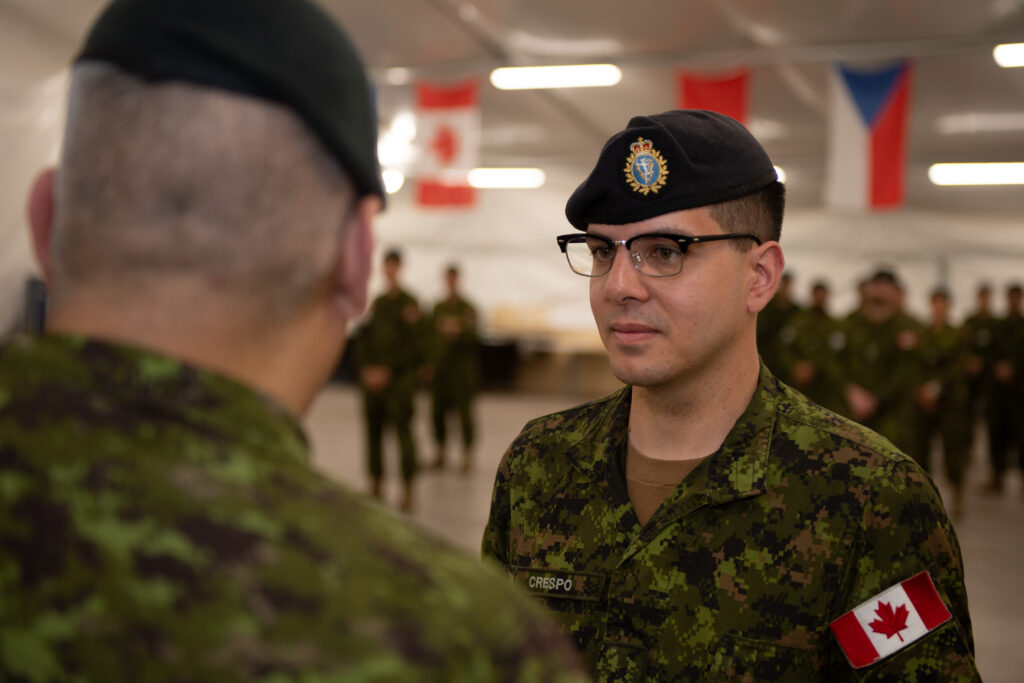 “From 9 Dec 21 to 15 Feb 22, Cpl Crespo served as a member of the Signal Squadron Transportable Local Area Network (TLAN) section, and from 15 Feb to 30 May 22 as the TLAN Detachment Commander, working in a position above his current rank. During this time, Cpl Crespo demonstrated outstanding professionalism, dedication and trade knowledge; working overnight on multiple occasions due to outages, ensuring integrity of deployed networks for all TFL users. His commitment and expertise reflected extremely positively on the squadron and TFL as a whole.” 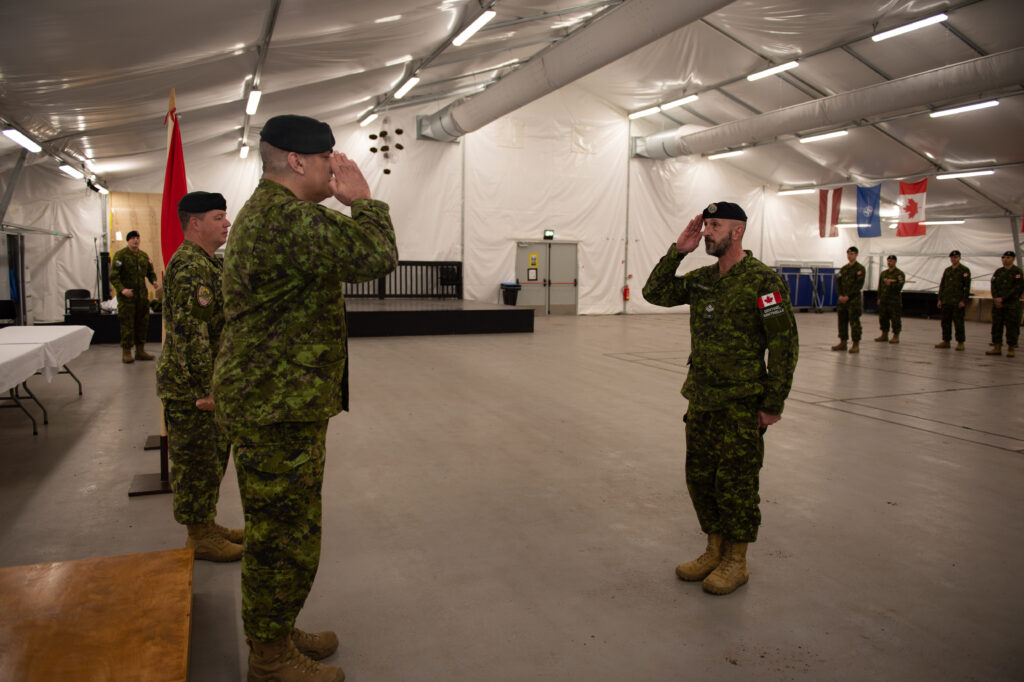 “From 12 Dec 21 to 13 Jun 22, MCpl Trylinksi demonstrated outstanding professionalism, technical knowledge and commitment to TFL mission success as the Signal Squadron Line Section 2IC. MCpl Trylinksi acted as the main liaison between the squadron and all nations on camp for line requirements, ensuring all projects were skillfully executed, enabling TFL units to accomplish their mission goals. His dedication to his team and the mission has brought tremendous credit to TFL.” 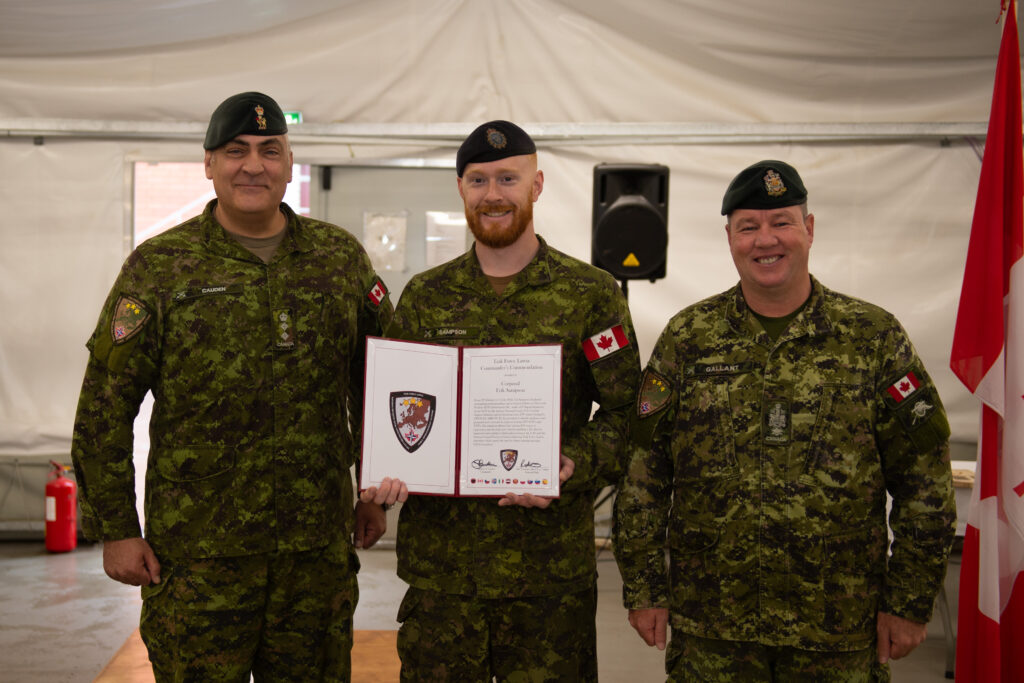 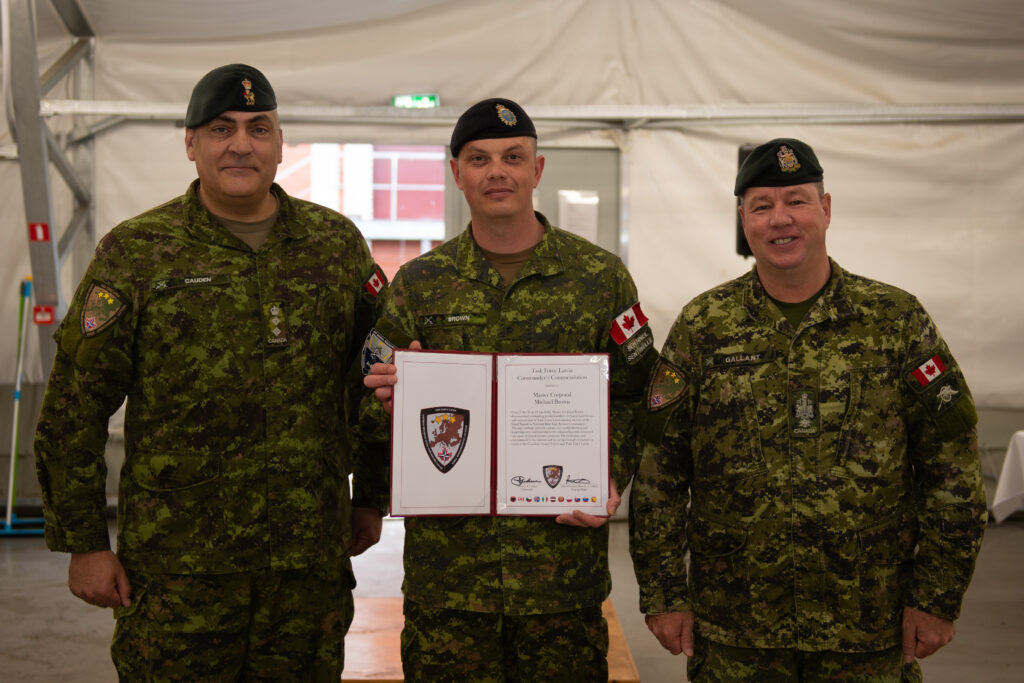 “From 9 Dec to 18 Jun 22, MCpl Brown demonstrated outstanding professionalism, technical knowledge, and commitment to TFL mission success as the Signal Squadron National Rear Link Section Commander. Through multiple network outages, his troubleshooting and leadership were instrumental to the safeguarding and continued operation of critical mission networks. His dedication and commitment to the mission and his troops brought tremendous credit to the Canadian Armed Forces and TFL.”

“The Signal Squadron Line Section is made up of members from different units and organization across Canada. Despite being complete strangers, they successfully created the most cohesive, respectful and professional team within the eFP. Through their efforts, Camp Adazi has been able to rapidly expand black and red network infrastructure and services to accommodate the large influx of personnel across the eFP; as well as ensure mission critical networks continue to function despite several large outages. The Line Section worked closely with G6 MI Bde to provide internet service connectivity to numerous sending nations in order to enhance command and control across the area of responsibility.”

Furthermore, on 23 May 2022, 9 members of the Sqn were awarded the MI Bde Coin for their support during EX KNIGHT SHIELD. Recipients are as follows:

As you can see, there were numerous awards given to individuals and teams during OP REASSURANCE 22-01. Some Sqn members may be receiving higher awards later on this year or the year after. Awards aside, the success of the squadron while on OP REASSURANCE 22-01 is due to the professionalism, cohesiveness and contribution of every Sqn member.