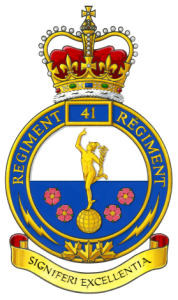 It is with great sadness that 41 Signal Regiment announce the passing of Honorary Colonel James Peter Graham on 30 December 2017 in London, United Kingdom. He was surrounded by his wife Pam, his brother Jeff and his Parents Ron and Jane Graham.

He was born 26 September 1967 in Moose Jaw, Saskatchewan. The family moved to Calgary and he attended Dr. EP Scarlett High School. HCol James Graham served for three years from 1992-1995 with 746 (Calgary) Communication Squadron and trained as a Lineman in Kingston, Ontario at The Canadian Forces School of Communications and Electronics before moving to London, England to complete his education at the University of Westminster. He received a Bachelor’s of Engineering (Honours) Structural Engineering 1995-1999. He married his wife Pam and has a memorable quote “Who can understand the way of the Gods, they create lovely girls and then turn them into wives.”

On graduating from the University of Westminster he started as a Site Engineer with Eve Group Ltd, This started his career and his exceptional technical knowledge of the telecommunication and construction industries spending a lot of time working on the National Wireless Grid and other telecommunications projects. James with his father Ron and his nephew Nolan received their iron rings together in Saskatoon, March 2014, bestowed on engineers upholding a high standard of conduct, becoming four generations of Graham to study in the field and receive the iron ring.

James continued to play hockey in England playing with Stearthan (South London) Night-Wolves. He was completive by nature and had posted scoring a hat trick during one game.  He was constantly bringing back to England hard to find hockey equipment for other team member on his many trips to Calgary.

James was constantly looking for investment opportunities; he had business interests in Calgary, Atlanta and England. He was constantly on an aircraft traveling between locations.

James Graham returned to Calgary often and kept engaged with the members of Calgary military and the Signal community attending all events, he even adjusted his work travel schedule to be able to attend. When at an event he ensured he connected with all ranks. Fiercely proud of his origins as a lineman, he credits his drive, work ethics to his time as a lineman.

HCol James Graham became the first HLCol of the newly formed 41 Signal Regiment on May 2012. HCol Graham was very giving of his time making an effort to connect with the Bde and Regt members. A Professional engineer who has a background in Communication and Electrical Engineering he was able to provide impromptu advise to Regimental members on his experience in large projects. He helped with setting expectations with the new Regt LCol helping him transition from a citizen to a member of the Regt. He provided advice based on his experience as an HCol and HLCol.

HCol Graham was a large donator for the Calgary Soldiers Memorial project; he also helped in soliciting donations from corporate Calgary. His purchasing tables and provided them to business executives and Regimental members for events like Calgary Garrison Ball, Highland Ball, MFRC events, breakfast on the bridge connecting business leaders with the military. During the 110th Birthday of Signals he not only ran a leg during the 41 Signals Regiment’s relay run from Calgary and Edmonton to Red Deer, he provided running shirts to all participants and event plaques to all the communities on the route.

HCol Graham during the 41 Signal Regt Freedom of the Town of Banff, helped engage the Banff town Council and the Banff Springs Hotel. He subsidised the Freedom of town dinner making it affordable for junior members of the Regt to attend. Always concerned with the members of the Regiment he sponsored two 41 Signals Regt Members C&E Vimy Battlefield Study Tour 2017 and was a major contributor to the tour.

HCol James Graham will be truly missed. A “Celebration of Life” will be held March or April 2018 in Calgary.