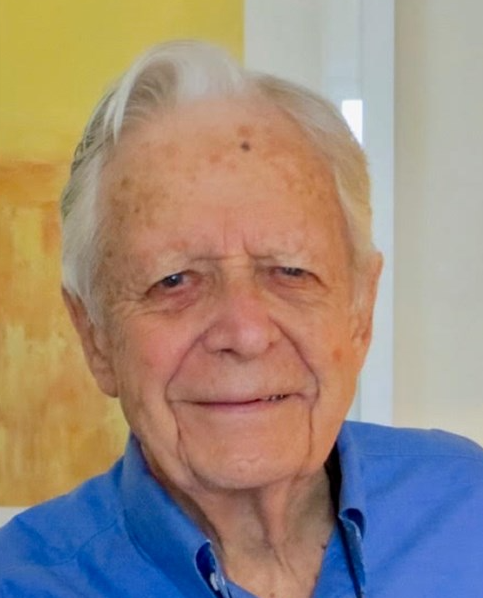 Goulet joined the Royal Canadian Corps of Signals in 1942 and served in the United Kingdom, Central Mediterranean and Continental Europe in WWII. He returned to Toronto after the war in 1946 at the age of 23 years and 9 months.

The couple moved to North Bay in 1950 shortly after the birth of first son Michael. His second son, Paul, was born in 1951.

In 1954, Bruce opened his own business, Bruce Office Supply on Cassells Street and then as the business grew, he expanded to a larger location purchasing the Zellers department store building bridging both Main and Oak Streets which acted as the first connecting walkway for shoppers in the city’s downtown.

Goulet then expanded again to a separate location directly across Main Street; a unique selection of giftware boutiques named La Promenade in the former Bank of Nova Scotia building which exists today as the Abbey under different ownership.

He was also a long time member of Royal Canadian Legion, as well as a former member of the United Nations Club of North Bay.

Goulet also became progressively active in municipal politics commencing in 1960 as an alderman, then as deputy mayor and then as North Bay mayor from 1971 to 1973.

Along with many others, Goulet pushed for preservation of the North Bay waterfront as a “people place” which would connect and integrate with the city’s downtown and offer North Bay and the region a unique access to the Lake Nipissing shoreline within the core of the city.

He named the section of land and the concept “The Golden Mile.”

On September 1, 2008 a sign declaring a section of Memorial Drive on the waterfront the “Goulet Golden Mile” was unveiled by then Mayor Vic Fedeli

Goulet was honoured along with five other inaugural members with a place on North Bay’s Walk of Fame by Mayor Al McDonald on July 26, 2012.

In 2015, Goulet was one of 50 select Canadians and groups to be presented with a special commemorative flag in celebration of the 50th anniversary of Canada’s national flag. The government presented this proud Canadian symbol to individuals and organizations who have contributed significantly to the well-being of fellow citizens.

Burial will take place this spring at the North Bay Union Cemetery.

If desired donations to the Red Cross Ukraine Fund would be gratefully acknowledged as expressions of sympathy. 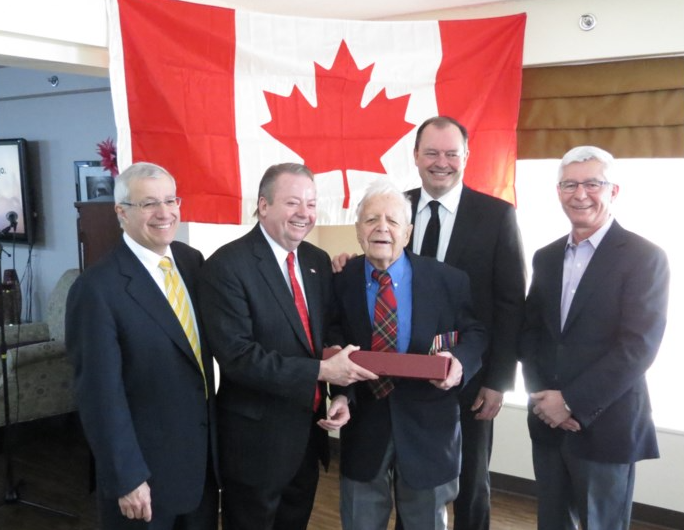 Bruce Goulet was honoured by Canada in 2015 for his service to the community. Here, at centre, he is joined by MPP Vic Fedeli, MP Jay Aspin, Mayor Al McDonald and sone Paul Goulet. Jeff Turl/BayToday