NDHQ/DHIST is collecting personal reminisces on the Canadian Army’s long stay in Cyprus.

Please find below the link to the story of how it came to be that two HF Radio Teletype (HF RTT) Detachments, complete with three-man crews, were airlifted from 73 Canadian Signal Squadron in Egypt (UNEF-2) to Cyprus in late July 1974 by RCAF Hercules aircraft from Lahr, Germany when the 1st Commando Group, an infantry battalion sized unit of the Canadian Airborne Regiment serving in UNFICYP, lost its secure telegraph links to Lahr and Ottawa because of actions taken by the Greek-Cypriot coup to ouster President (Archbishop) Makarios.

Our traditions and heritage can be traced back to the founding of the Canadian Signalling Corps in 1903. Our members have served in every corner of the globe and here at home in Canada. As highlighted in our recently published history – Semaphore to Satellite – our Branch/Corps have been leaders in technology innovation and the employment of new and advanced technology throughout our history while addressing the critical command and control requirements of our military. This section will represent our heritage with stories of our men and women who so gallantly served our country with dedication and courage.

Here is an example of what we may include in this section.  This is the 75th anniversary of the invasion of Italy, our Royal Canadian Corps of Signals was fully integrated into the invasion plans with 1 Div Sigs providing the communication support for MGen G.G. Simmonds and his 1st Canadian Division who were leading the Canadian contingent as part of the British 8th Army.  The photo included here shows a RCCS Lieutenant operating a 22 set somewhere in Italy. 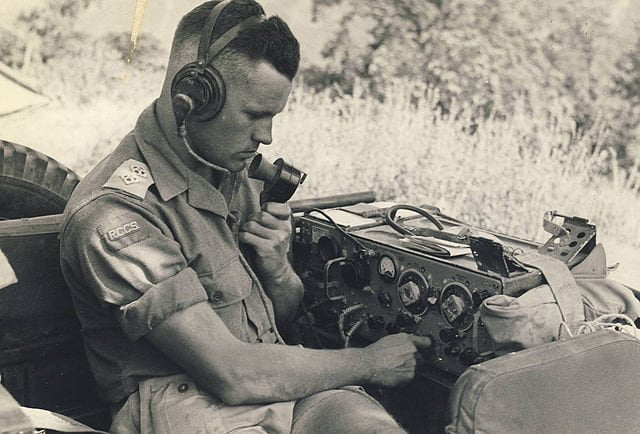 On 20 October 1978 HRH Princess Anne, Princess Royal made her first visit to the Communications and Electronics Branch after her appointment as our Colonel in Chief.  Attached are some of the photos memories of that visit. 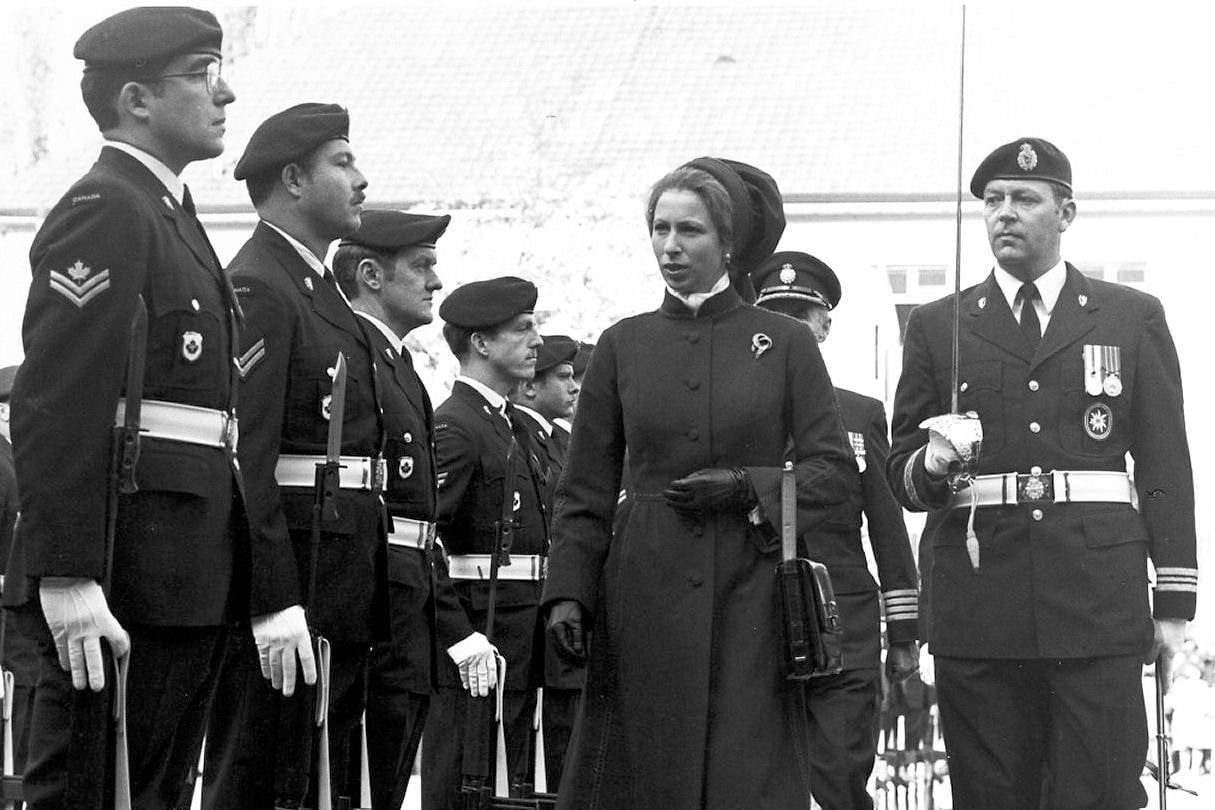 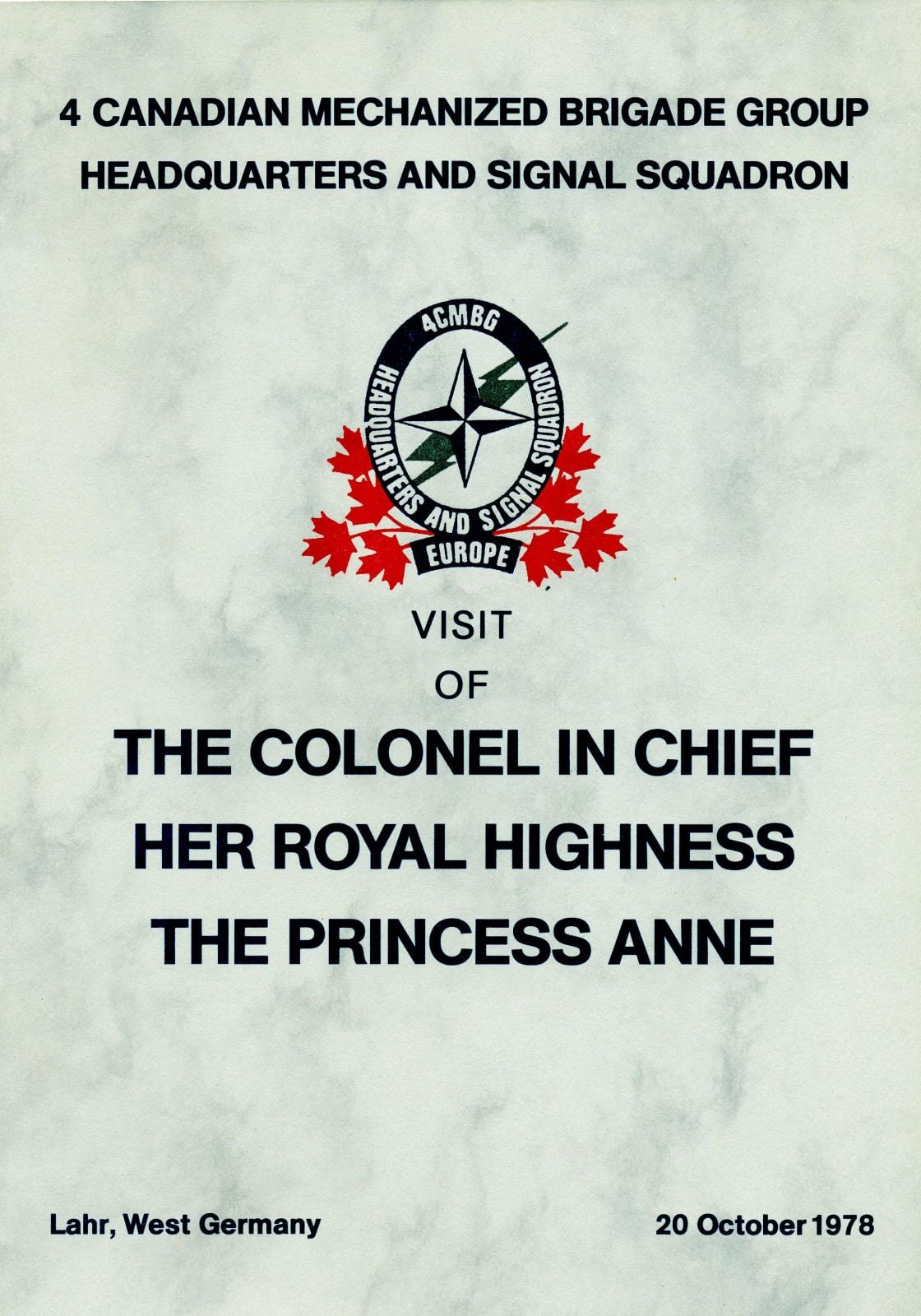 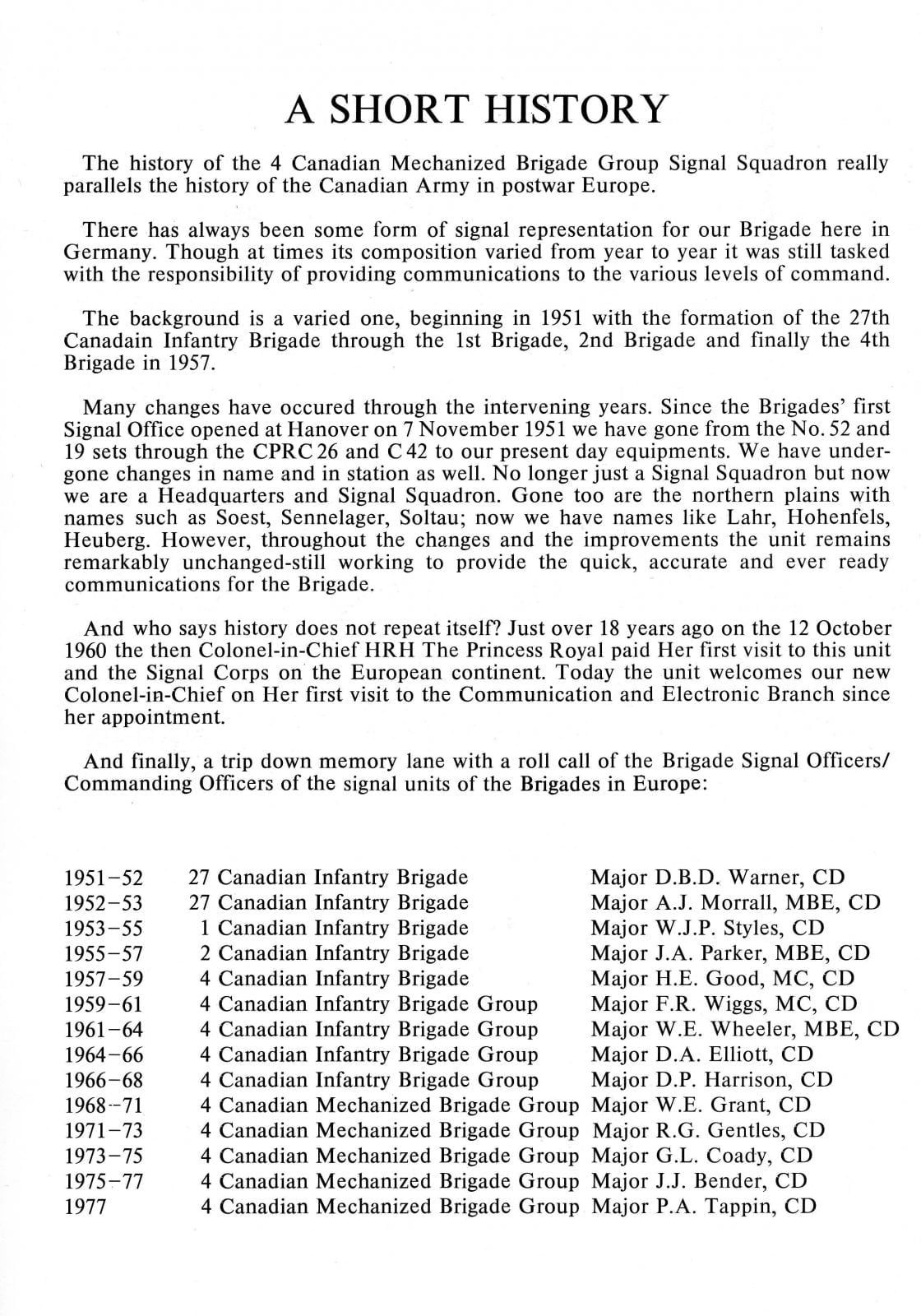 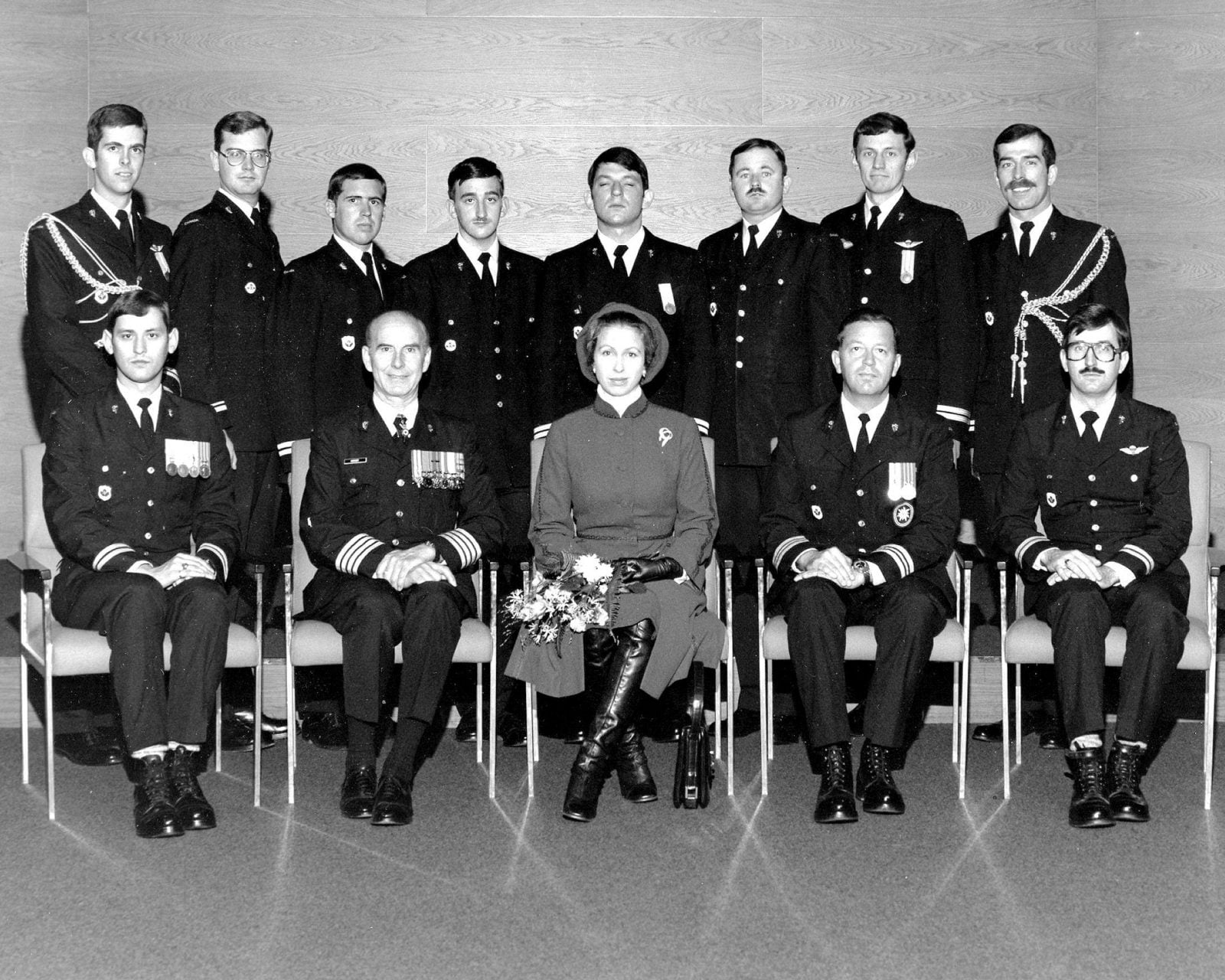 On 10 July, the commemoration of OP HUSKY was held in Belleville by the 1 Inf Bde regiments that landed at Pachino, Sicily 76 years ago – The Royal Canadian Regiment, The Hastings & Prince Edward Regiment and The 48th Highlanders.

A proud contingent attended from the Joint Signal Regiment to honour the Regiment’s history as 1 Canadian Division Signals. Regrettably, Mr. Martin, Signals veteran from the Italian campaign was unable to attend.

The JSR contingent fell-in, quite smartly, with staff from HQ 1 Cdn Div to form a combined ‘Div HQ and Sig Regt’ troop for the ceremony; very fitting given divisional staff and signals were the first casualties of OP HUSKY, when a torpedo struck MV Devis, and provided C2 for MGen Guy Simonds during the campaign.

BZ to LCol Todd Anstey and the 1 Cdn Div HQ staff, and Capt Joe Sager and the JSR signallers! 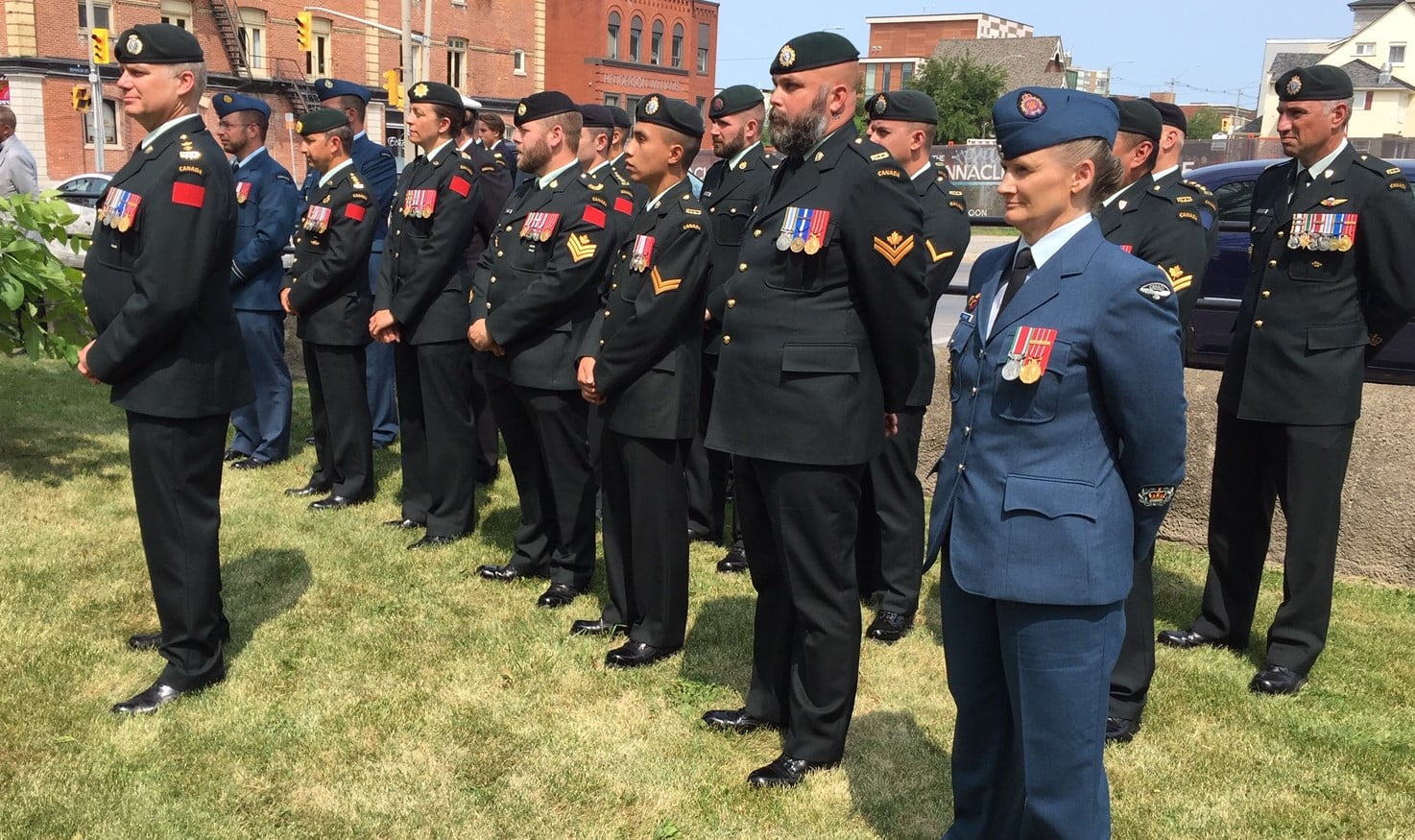 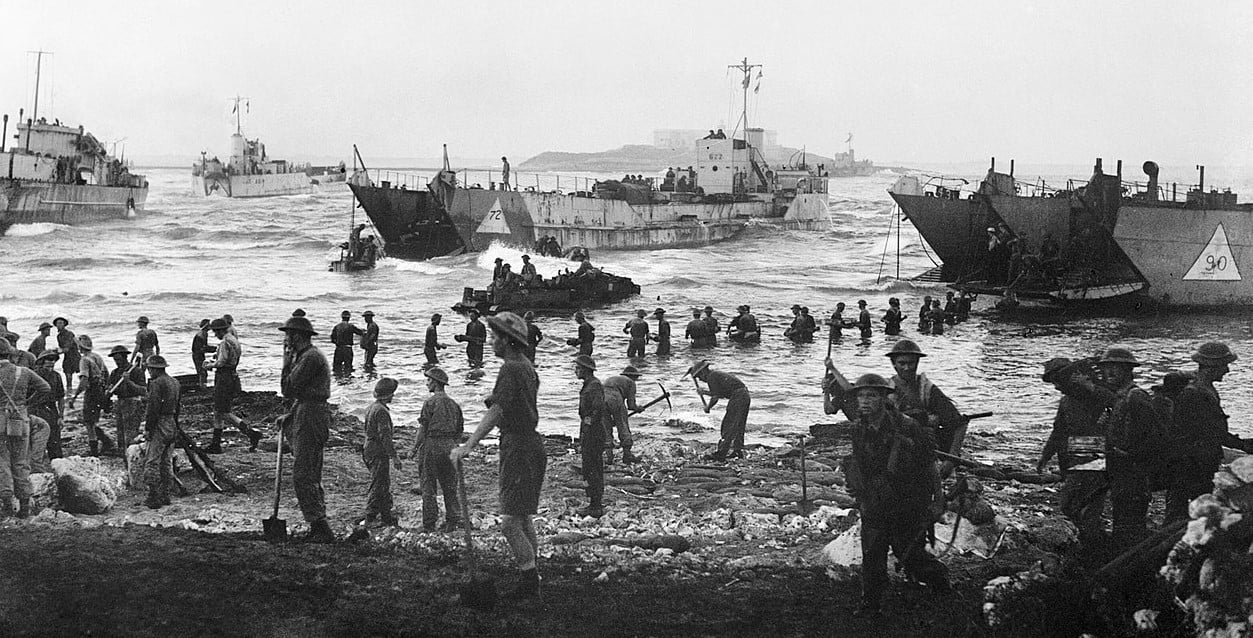 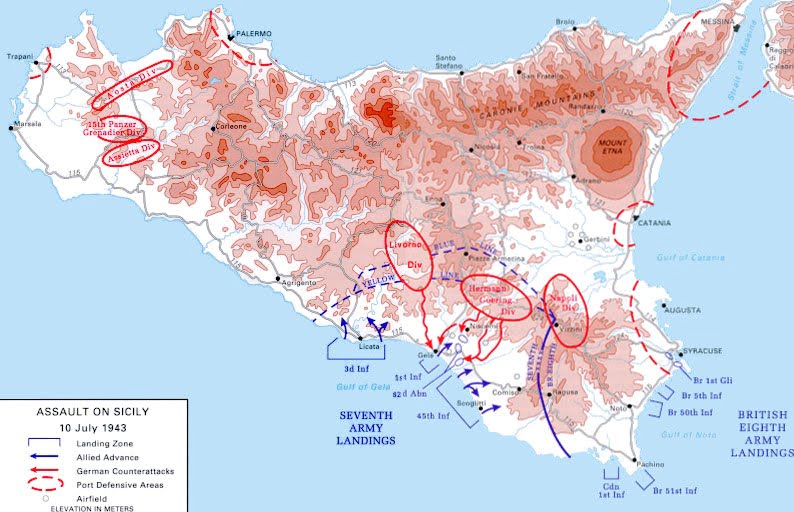 2018 marks the 65th anniversary of the signing of the Korean War Armistice on 27 July 1953. Members of the Royal Canadian Signals had a large presence in Korea during the war with the main units being the 25 Canadian Infantry Brigade Signal Squadron and the 2nd Field Regiment RCHA Signal Troop. The following text is taken from The History of The Royal Canadian Corps of Signals…’Wireless communications in Korea had proven very satisfactory, contrary to earlier fears. Hilly and mountainous though the country was, with distances between units and formations considerably greater than normally encountered, wireless contact had been continuous and signal strengths good. Operators’ knowledge of radio wave propagation and the use of aerials had contributed largely to this success….For normal brigade communications the workhorse radio of the Second World War, the No. 19 set, had been found reliable as ever and a No. 52 set link had kept the brigade in touch with the Canadian base in Hiro, Japan.’

The photo at right shows Royal Canadian Corps of Signals signalmen operating wireless sets in an old Korean house. Left, Normand Beddard and right, Walter Buccos. The radio is a WS No. 19, the telephone on the right is a Telephone set F. To the left of the telephone is a Fullerphone. [Thanks to Joe Costello for his keen eye and Signal knowledge].

Thank you to all our Korean War veterans and specifically our Signal personnel who served so courageously and bravely in this very complex and challenging theatre of war.VVV 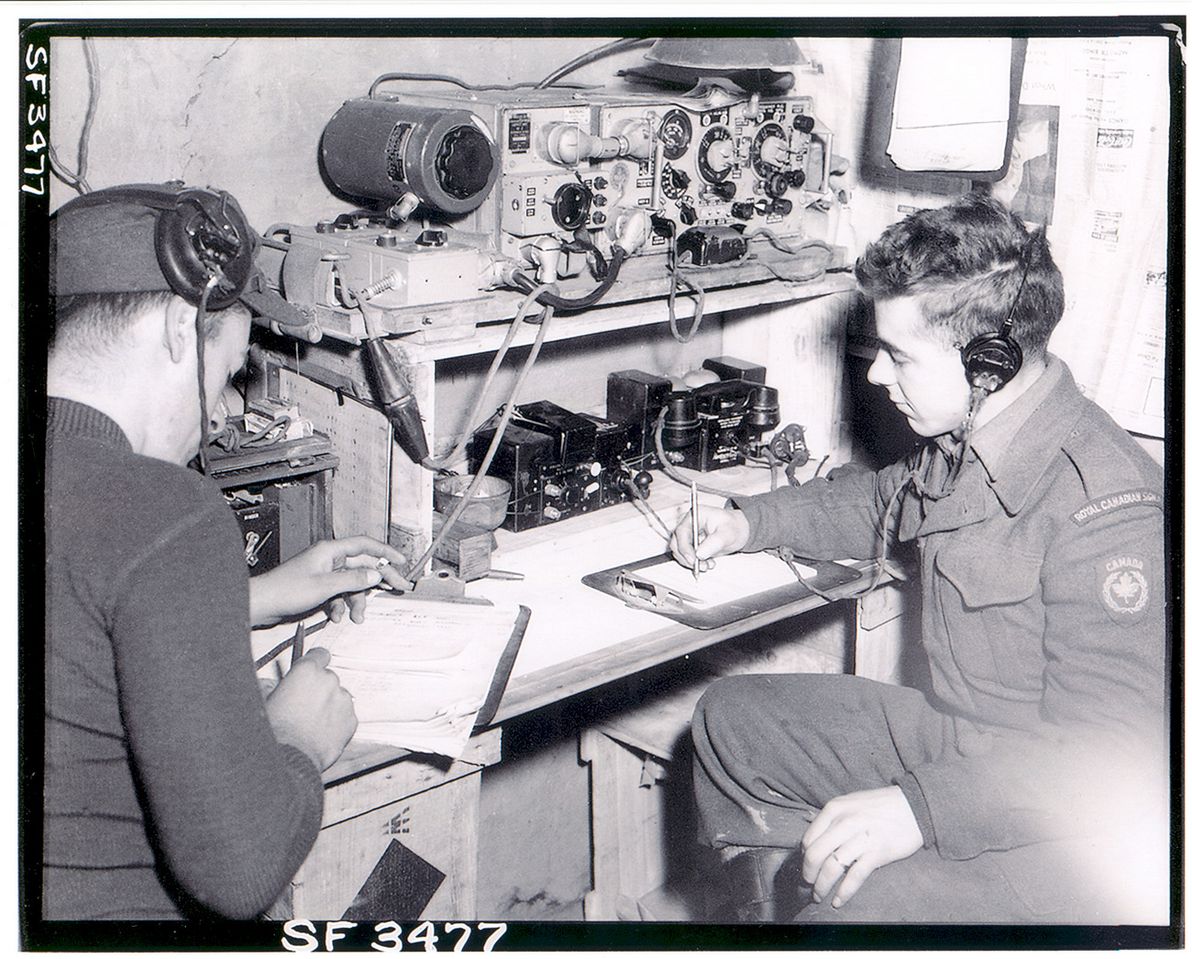 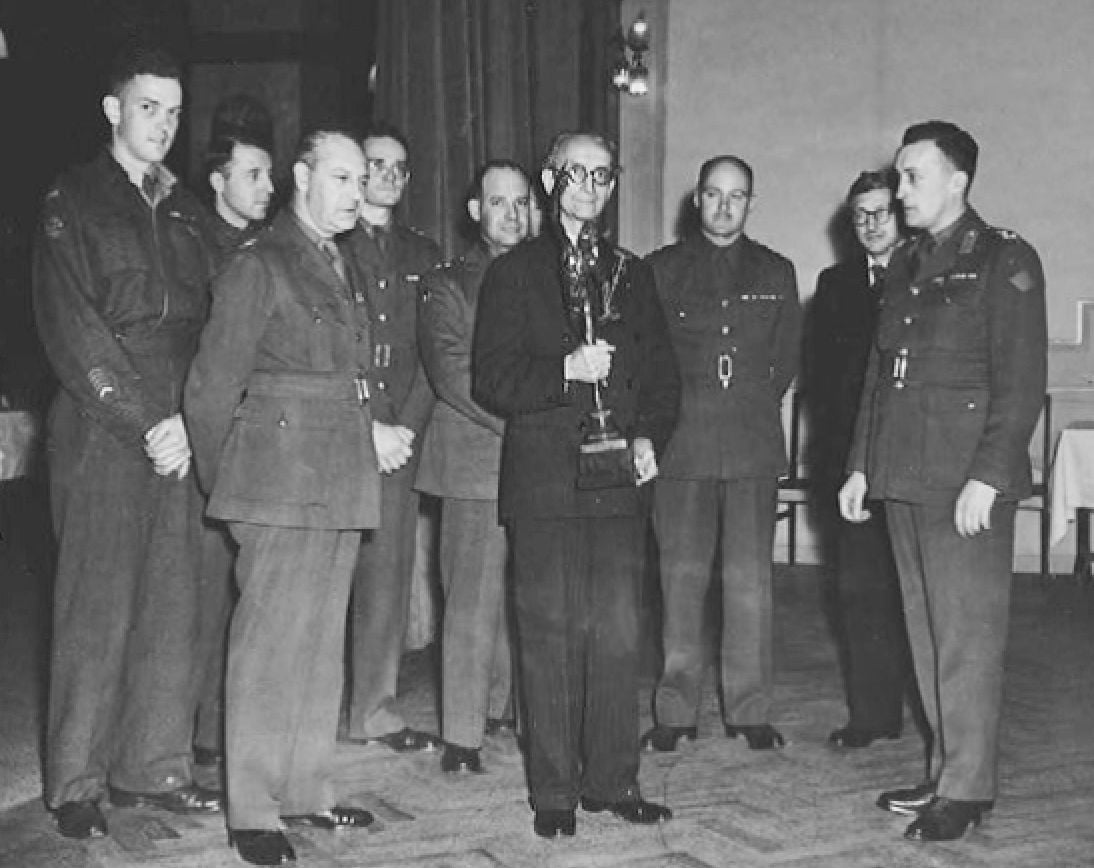 On 3 November 1945, the Burgomaster of Antwerp presented 1 Army Signals a bronze statuette of ‘Jimmy’, which today occupies a place of honour in the Vimy Officers’ Mess. 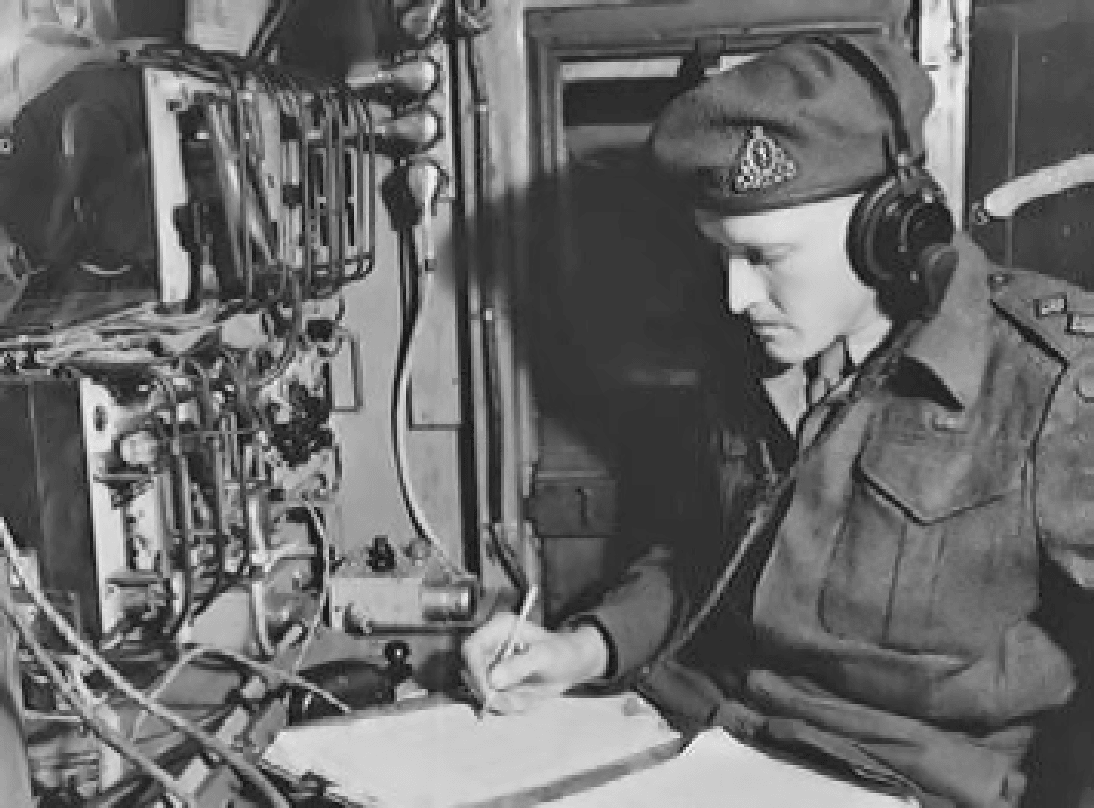 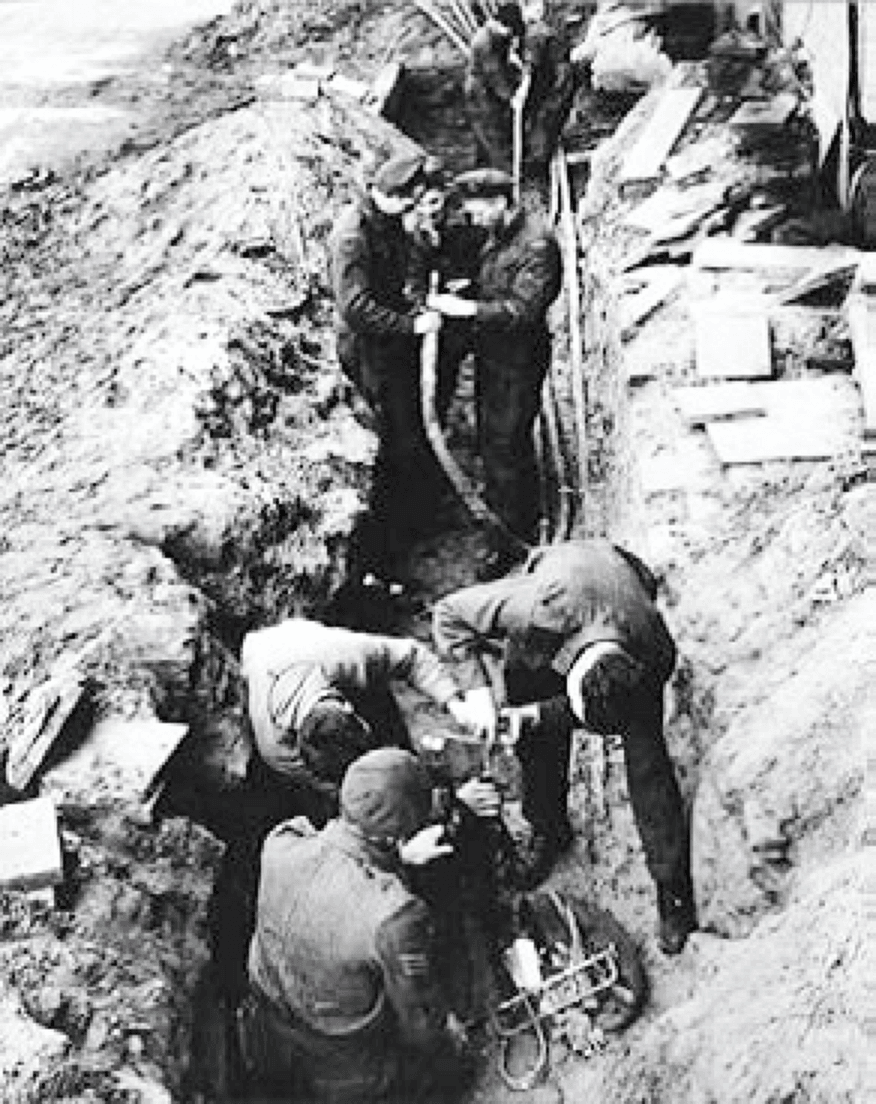 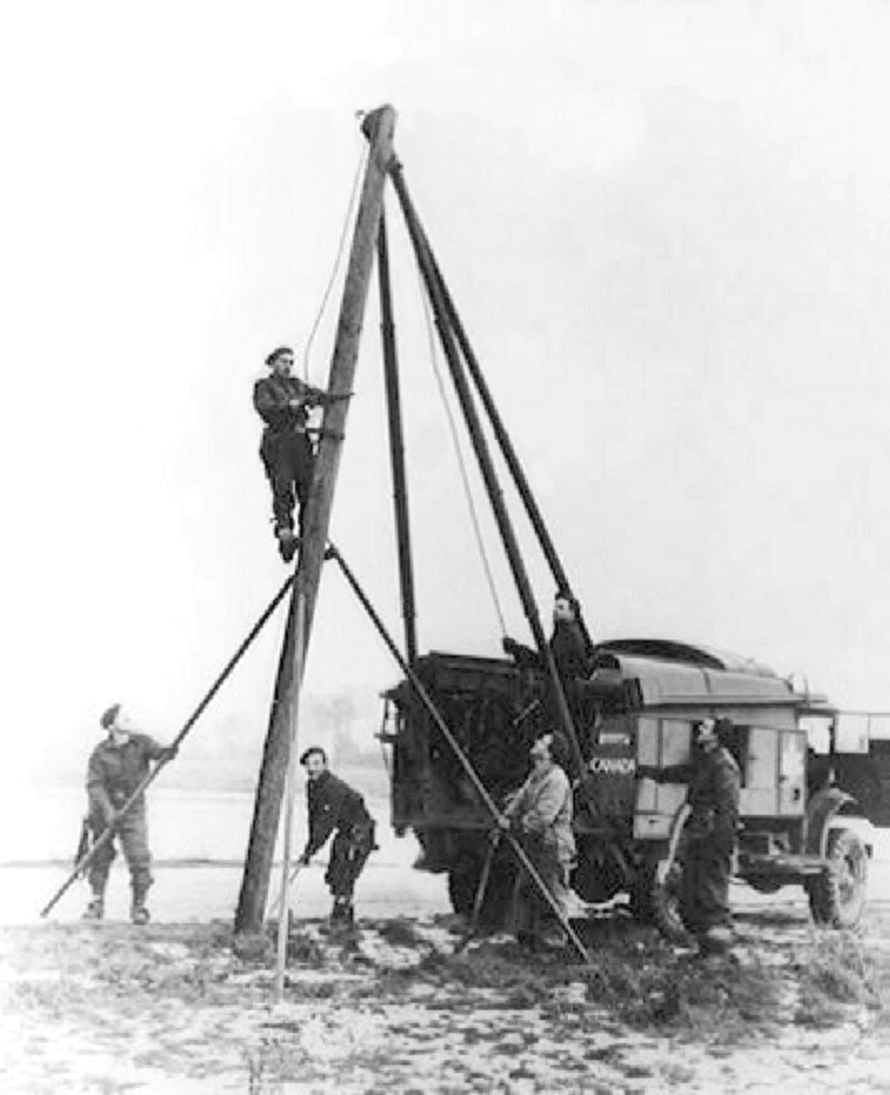