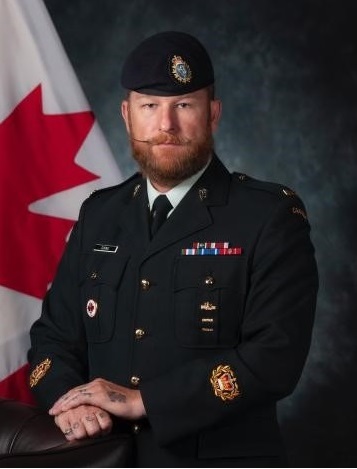 It is with deep sadness that we inform you that Master Warrant Officer Ronald During passed away at the Red Deer Regional Hospital Center on Monday, October 3, 2022, at the age of 52 years.

Born in Halifax, Nova Scotia, MWO During first enrolled in the Military in 1988 through the Summer Youth Employment Plan (SYEP) in Halifax as a Naval Reservist at HMCS SCOTIAN. He did his 10 week recruit training in Halifax, along with Naval environment training and Trades Trg as a ships BOSIN. As a member of HMCS SCOTIAN he and his unit were responsible for the new task of patrolling the 200 mile limit. After a two years as a BOSIN, he decided to attend College and put his Military career on hold.

In 1996 he re-entered the CF as a Field Engineer to utilise the skills acquired at College. Then he remustered in Sept of 1997 to his current Trade as a Telephone Lineman Apprentice QL3 course. He trained for 10 months in Line Training at CFSCE in Kingston Ontario and was posted in June of 1998 to 1 Canadian Mechanised Brigade Group HQ&SIGS in Edmonton, Alberta where he stayed until 2003. During his posting in Edmonton he was deployed to Bosnia in 2000, then promoted to the rank of Cpl and sent back to CFSCE and completed his QL5 Journeyman Course. Once back in Edmonton he was deployed again to Bosnia in 2002 as the camp LCF. After 5 years in the Edmonton area he was posted to CFS Leitrim Det Masset in the Queen Charlotte Islands off the coast of BC.

With a short 12 month stay in BC he was promoted to the rank of MCpl and posted to 2 Canadian Mechanised Brigade Group HQ&SIGS in Petawawa. During his short time in Petawawa he completed his PLQ and subsequent substantive rank as a MCpl.

A new position for a Lineman was created in Yellowknife in 2005 and was offered to MCpl During in September of that year, after the paper work was finalised and being in Pet for only 14months MCpl during was posted to CFNA as their new Lineman. As the first ever CF Telephone Lineman in the North. He has served as the Area Line Construction Foreman for a little more than 3yrs and was responsible for any and all structure wiring projects along with antenna installation and maintenance north of the 60th Parallel. As the advisor for the J6, he provided representation for JTFN and the Line Trade during all phases of construction and the upgrade of the cable plant already in place. During his time in the North he was sent back to CFSCE again, this time to complete his 052 LMN QL6A course.

Upon completing numerous Sovereignty Operations in the North and working with the Canadian Rangers (1CRPG) MCpl During was posted to 1 RCR in Petawawa as the Bn LCF. After completing Regimental indoctrination and some intense work-up training he deployed as the Battle Group LCF for TF 1-10 in Afghanistan. During his deployment he was promoted to the rank of Sergeant. Once back in Canada he was posted to 3RCR as the Sigs Pl Sgt and subsequently a CFTPO was raised to fill a Trg position within 1CMBG HQ&Sig Sqn.

In 2012 he was posted to Kingston and to the Canadian Forces Joint Signals Regiment, 1Line Sqn, where he was employed as one of 4 Cable Crew Sgts. Time in 1 Line consisted of numerous road jobs taking him from B.C. to Quebec, including a Roto 0 trip to Kuwait to assist the expansion of the Canadian HUB. During his time in 1 Line he was sent across the road to CFSCE to complete his DP4A CIS TP WO.

In 2015 he was promoted to Warrant Officer and asked to take a position within 1 Bde as the LCS, where he was employed as the Western Area Trade Advisor and Jr Career Manager, along with a main task of being an Advisor to the Bde Cmdr. While in Edmonton, after 14 months, he was shifted to the Asst LCS after the MWO position was filled. During his time in Edmonton he completed his ILP and was requested by CFSCE to assist in teaching tasks. After supporting many exercises and trg plans within 1 Brigade he was informed that a posting to Ottawa was confirmed.

WO During was posted to Ottawa into the Cable Plant/Design position under 77 Line Regt and in line with SSC in Tunney’s Pasture, where he was responsible for many different installs over a number of bases in Eastern Canada.

In May 2021, MWO During was posted to DLCI as the Army Line Communications Superintendent where he was the advisor to the Canadian Army on behalf of the Line Trade.

Ron will be laid to rest at the Beechwood National Cemetery on 3rd Nov at 13:30. https://beechwoodottawa.ca/en/services/mwo-ronald-during-cd

For those who cannot attend in person to the ceremony, there will be a live streaming under the following link that will allow them to view the ceremony. https://foveo.stream/beechwood/mwo-ronald-during

In lieu of flowers, the family is requesting support for the Master Warrant Officer Ronald During Education Legacy Fund. This scholarship will support students attending the Nursing Program at Red Deer Polytechnic and provide an ongoing legacy for Ron.

It was important to Ron that he showed support to the amazing nursing staff who cared for him during the last stages of his service injury. This endowment will prepare the essential workers who are needed to care for future service members who may also find themselves with injury due to their work in the Canadian Armed Services.

In memory of Ron, you can make a cash, credit, or debit donation toward this scholarship by contacting Abby Kaun at Red Deer Polytechnic. Your contribution will help us establish a scholarship fund that will help Nursing students for years to come. Donations over $25.00 will receive a charitable tax receipt.

Here are the instructions to donate to the scholarship.
https://giveback.rdpolytech.ca/scholarships

Under the Scholarship Selection drop-down:
Master Warrant Officer Ronald During

Thank you to everyone who has expressed their wish to honour Ron’s memory in some way.

If you wish to contribute by cheque, these should be made payable to Red Deer College Foundation, ATTN: Abby Kaun, and mailed to