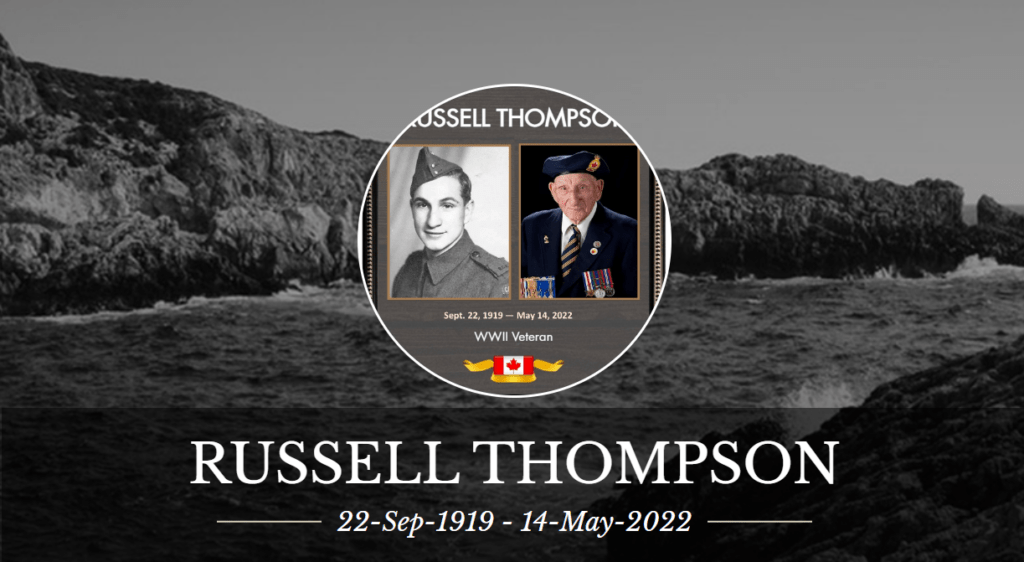 Select this URL to see the original obituary: https://www.arbormemorial.ca/gftompkins-central/obituaries/russell-thompson/86275

Russell Thompson, in his 103rd year, founder and patriarch of Thompson Electric in Seeley’s Bay, Ontario, passed peacefully with family, at Kingston General Hospital on Saturday, May 14, 2022.

A full life well lived. A man known for many things like the best 3-day pickles and creating a local electrical business to support his family and the community.

Born in Dauphin Manitoba, the second youngest of 11 children, Russell leaves his companion of over 35 years, Muriel Knapp and sons Earle and Patricia (née Bennett) and Stephen and Angela (née Brown) 4 grand-children, 6 great-grandchildren.

As a proud World War II veteran, Russell often told the stories of the hardships and strengths of the people of Holland he met, and the long friendships that continued after.

In 1946, he returned to Seeley’s Bay to marry his sweetheart, Marion Keeler. They purchased her father’s small farm and tourist business and started Thompson Electric. Ever the entrepreneur, he worked many business opportunities to raise and support his family.

In 1982, after Marion’s sudden passing, Russell continued to be active in business and the community– he was famous for his fish fry’s and cottage get togethers. He also met a local tourist business owner who became his partner of an additional 35 years, Muriel Knapp.

Russell loved his garden. He was happy to grow and share the results of fresh vegetables with family and friends. Right up to the week before his passing he was outside, working in his backyard garden from the seat of his red “Cadillac” scooter. Throughout his years he was also an active community leader – Seeley’s Bay Legion, Lions Club and Masons, he believed in giving back.

He especially loved working with the community youth as both a hockey coach for many years and later a Remembrance Day speaker at local elementary schools each fall.

Russell loved to travel, spending many winters in Florida with family and friends and a daily regular on the volleyball court. He travelled Canada coast-to-coast as well as Asia, the Caribbean, Europe, Saudi Arabia, and Mexico.

Russell’s friendship and caring personality will be greatly missed by all who knew him, especially his family and friends.

A celebration of life is planned for Saturday July 30, 1 to 4 pm at the Seeley’s Bay Legion.

Should you wish, please donate to the Canadian Cancer Society, the Seeley’s Bay Legion, The Seeley’s Bay United Church or place of your choosing in his name.