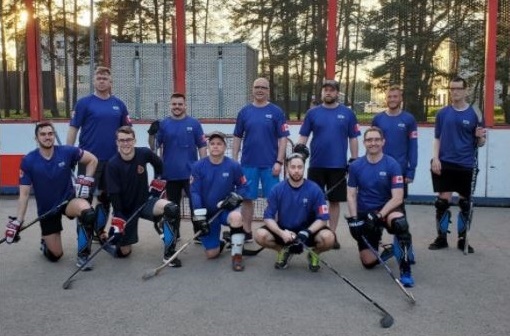 Having been permitted to play some sports internally at Camp Adazi, Latvia starting on 11 May 21 because of the efficacy time after the 1st vaccination and no COVID cases in weeks, the eFP Battle Group (BG) organized a ball hockey tournament for 22 May 21 named Ex WOLVERINE SLAPSHOT. The tournament consisted of 16 teams from multiple nations, to be played at the outdoor rink on camp. With only a few days’ notice, Sig P.M. Hall organized a team of 10 players from the Sig Sqn, and Maj P. Gaudreau from TFL HQ. The team name was the Hermes War Hounds. Because of Force Protection Health Measures (FPHM) goalies could not share the few sets of goalie gear available through PSP, so RCD MCpl D.L. Wilkinson was our goalie throughout the tournament. For most players, the first game of the tournament would be their first time playing ball hockey in over a year because of the pandemic. Many were anxious about how we would perform, with the majority of the Sig Sqn receiving the 2nd vaccination the day of, or during the two days prior, and side effects being more severe.

The all Canadian final game was against the BG’s Canadian 1 RCR Infantry Coy, Berserker. A tough, clean, and fast paced game, the Berserker team defeated a tired, but proud group of Hermes War Hounds. Overall a great tournament, topped off with pizza provided by WO G.J.F. Limbert, Extension Troop WO. The Hermes War Hounds are now looking forward
to the next ball hockey adventure.