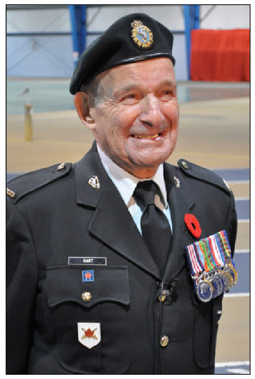 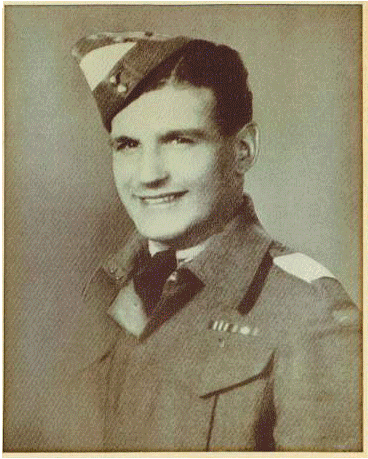 The Communications and Electronics Branch and The Royal Canadian Corps of Signals is deeply saddened to note the passing of Honorary Colonel (HCol) David Lloyd Hart, MM, CD, RCCS. David passed away on Wednesday, 27 March 2019 at the Jewish General Hospital in Montreal, Quebec surrounded by his family.

Honorary Colonel David Lloyd Hart was born in Montreal on the 7th of July 1917. Upon his graduation at the High School of Montreal, he attended studies at Strathcona Academy and later McGill University where he obtained his Chartered Accounts Degree. HCol Hart enlisted in the Army Reserve in 1936 and achieved the rank of Lance-Corporal. He deployed overseas in 1940, serving in England and France during the Second World War. Among other honours, he was awarded the Military Medal (MM) by His Majesty King George VI at Buckingham Palace – a bravery decoration for enlisted men and second only to the Victoria Cross – for gallantry during the infamous Dieppe Raid in 1942.

David Hart – then a Sergeant with the RCCS – was the only communication link between the beachhead and the headquarters operating out of the naval fleet. In the confusion of the raid, signals proved essential to the survival of the Allied troops. Sergeant Hart spent much of the battle communicating with the frontline; reporting back to headquarters where he relayed movement, coordinated reinforcements, and conveyed the retreat orders to the troops. At the height of the battle, he cut off communication with headquarters in order to orchestrate a critical change to the timing of rescue craft facing relentless enemy bombardment. His actions saved the lives of hundreds of Canadians. His MM citation stated that his stalwart actions under enemy fire ‘made him a conspicuous example to his men’.

After the war, HCol Hart continued to study accounting and formed his own company: David Lloyd Hart & Co. Never straying too far from the military, he joined the Army Signal Reserve eventually rising to the rank of Lieutenant-Colonel in 1961 to command 11th Signal Regiment. He was appointed Honorary Lieutenant-Colonel of the 712 (Montreal) Communication Squadron from 1976 until 2013, and afterwards promoted to Honorary Colonel of 34 Signal Regiment based in Westmount, Quebec.

In 2013, HCol Hart became one of the first recipients of the Communications and Electronics Colonel-in-Chief Commendation (presented by Her Royal Highness – The Princess Royal) for a lifetime of outstanding service to the C&E Branch.

In 2016, HCol Hart celebrated his 40th anniversary as an Honorary Colonel and Lieutenant-Colonel of his beloved Quebec-based Signal Squadron and Regiment.

HCol Hart wears a fourth clasp to his Canadian Decoration (CD) recognizing over 52 years of loyal and dedicated service to Canada.

The date of the burial service is forthcoming.

I had the honour of seeing you receiving the first Communications and Electronics Colonel-in-Chief Commendation (presented by Her Royal Highness – The Princess Royal, Princess Anne) for a lifetime of outstanding service to the C&E Branch on 24 October 2013 during the parade held in the Field House in Kingston, Ontario.

Thank you for your service…

Thank you Sir for your sacrifice. May you be at peace

[…] In those 30 seconds, Hart managed to coordinate “a critical change to the timing of rescue craft facing relentless enemy bombardment,” the Canadian Armed Forces’ communications association said in its obituary. […]