Let me start by thanking all who read this in the dog days of summer for your support in helping achieve the aims of this charity. We have much news of progress on the Hill 70 Memorial Project, so I hope you have time to pour a lemonade and catch up on news of your project.

The big news is that our intent to build the walkway that will permit wheelchair access to the Obelisk has been fulfilled. That walkway is quite expensive ($2M) because it contains a trench and a bridge so to provide a gradual rise to the summit. Two major donors have stepped up and the path will be named in honour of Private Frederick Lee, a Canadian of Chinese heritage who was killed in action with the 47 Bn CEF during the Battle of Hill 70. Construction is scheduled to begin very shortly and should be completed by the end of the year. 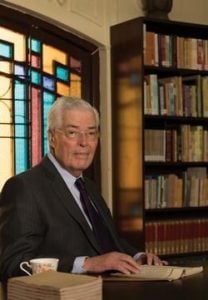 Mr Robert Ho, C.M., OBC, of Vancouver has graciously donated a significant portion of the funds necessary to build the Frederick Lee walkway, and earth moving begins in a matter of days.

The stainless-steel cladding has now been applied to the roof of the visitors Kiosk, and the information panels are manufactured and waiting to be shipped any day now to be mounted inside. 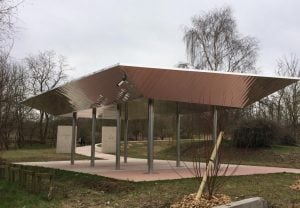 The newly constructed Visitors Kiosk near the front gates of the Hill 70 Memorial.

Our fundraising continues with two specific aims: maintenance in perpetuity for the memorial park, and the improvement of walkways in the park to recognize all those six soldiers awarded the Victoria Cross at Hill 70. We plan to allocate their name to each of the walks. This will ensure pilgrims and tourists have a proper way to visit the site and the adjoining commonwealth war grave cemetery (which was started by Canadian Corps in summer 1917).

The DNA research section in DND has identified the bodies of several soldiers who fell at Hill 70 and whose remains were unrecovered for 100 years. Their families will be taken to France and soldiers from their original regiments will act as burial party this summer in the Commonwealth War Graves Cemetery beside our monument. It is always a very powerful and touching ceremony.

We are delighted to see that the Battle is mentioned in more and more media references. One of our charter aims is to ensure that Canadians are aware of the Battle of Hill 70, Canada’s Forgotten Victory.
The media coverage is available through links on our website: www.hill70.ca

The Globe and Mail, our print media partner, ran a magnificent series of articles during the hundredth anniversary in August. The publisher has agreed to provide some more coverage this year, with the main author being their senior correspondent, Roy MacGregor. Keep an eye on the Globe in August, September, and November. 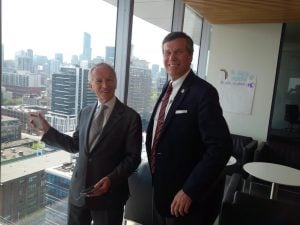 The publisher of the Globe and Mail, Mr Phillip Crawley, CBE, gives the Hill 70 visitors a tour of the new office building on King Street in Toronto.

There are also numerous French publications which are now covering the increasing traffic to the Memorial Site. One excellent bit of news is that the Loos organisation that helped commemorate the Battle of Hill 70 (L’Association MOSAHIC) was awarded a prestigious honour in Paris last month.

The landscaping is doing well, and in fact the combination of a wet spring and a hot summer has caused the prairie grass to grow much taller than the landscapers expected. We are now planning to mow one meter alongside all the paths and around the benches in order to keep nature at bay, though the blend of prairie flowers should have a lovely aromatic mix blooming through three seasons. 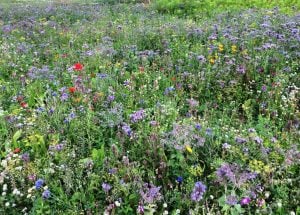 There are more and more visitors who now go to the site. Tour groups guided by historians now have a spot to focus on. Various ceremonies have been held at the monument by people whom we don’t know, and pipers now go and perform solos for families that we only find out about afterward. It is wonderful to see the heightened awareness of the Battle of Hill 70 and the place it deserves in Canadian history gradually gaining importance. Similarly, the people of Loos are beginning to feel quite possessive of the Memorial Park, and many are requesting the town of Loos take good care of ‘their’ park when they perceive there is anything amiss.

The education team is still at work creating supplements to send to all the High Schools across the land in both French and English. They are also creating a graphic novel about Frederick Lee who was killed at Hill 70, and who has no known grave. He was a Canadian born man of Chinese heritage, so there is considerable interest in the Chinese-Canadian community to see that this is done to note his place in the story of Canada’s development as a nation. An honour roll student selected as a machine gunner with the Rocky Mountain Rangers, his sacrifice is a perfect example of the diversity of the CEF one hundred years ago. Even his community in his home town of Kamloops had forgotten that Lee was of Chinese ancestry, so the symmetry of a forgotten man, and a forgotten Battle is quite striking. Many Canadian donors of Chinese ancestry have stepped forward to pay for the graphic novel, parts of the education program, and the very expensive walkway to the summit, which will be named in Frederick Lee’s honour. 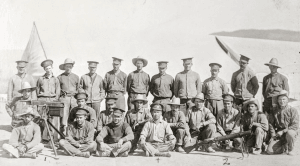 Frederick Lee (centre) posing with members of the machine gun section of the 172nd Battalion (Rocky Mountain Rangers) at Vernon Camp, B.C. in 1916. Note the Colt Model 1895 .30 in. ‘Potato Digger’ machine gun on the left and the Lewis gun on the right.

Most of the funds we have raised to date are from private citizens; we have approached the Canadian Government but there is no indication to date that they may be considering a contribution, though the Government of Ireland has also donated, and we are hopeful of a donation from Northern Ireland. Remaining to be funded are the activities of Teachers and Students Battlefield Travel Bursary recipients. Nor have we entirely funded the second phase of the monument, which includes the several walkways to be named after VC winners. Fund-raising is still therefore a major priority and we have several initiatives underway to seek further support for the project.

One is based in Toronto and we are receiving great support from Don Cranston, Peter Osborne and others as we continue fundraising in order to finish important elements at monument. Another is headed by Jack Gin who has been so instrumental in raising the profile of the Project on the West Coast. Finally, I would like to add that several very thoughtful gifts have recently been received – one from Michael Royce to establish a plaza in the name of his grandfather who had fought with Canadian Corps and another from John and Jan Macintyre to fund bench in honour of her grandfather who served with the Canadian Army Medical Corps. Both these elements will be added during the upcoming construction phase at the memorial site. 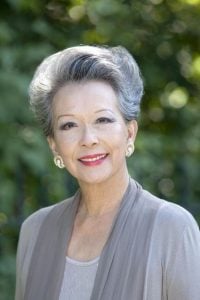 The Honourable Dr. Vivienne Poy has been not only a generous donor but extremely
helpful in providing advice and guidance to assist the Project to accomplish its many aims.

Great progress is being made on the Audio Tour for the memorial site. It is planned that in the near future visitors will be able to use their own personal electronic device to listen or watch a series of audio / video vignettes about the battle via mobile broadband. The series will consist of 13 individual stories on various aspects of the Battle, one of which will be devoted entirely to Frederick Lee. The latter has already been recorded in English, French, Mandarin and Cantonese. Added to this collection will be the 7 existing videos that have already been posted on our website. We should be the first Canadian Memorial which uses GPS locators to trigger the visitor’s own smart phone or iPad to relate these stories as he tours the site.

Several well-known Canadians have lent their voices to the recording: narration by Dan Ackroyd and Bernard Derome. Gen. John de Chastelain speaks for Sir Arthur Currie, and Gen. Andy Leslie will read the script of his own grandfather who commanded the Counter-battery Artillery at Hill 70 one hundred years ago. Youthful soldiers’ voices were read by RMC students, and some very poignant letters home from the front were read by Lana Lockyer, the granddaughter of their author. The project is very grateful to Mr. Richard Wong for funding this initiative. I would also like to add a huge word of thanks to Corus Entertainment and its Senior VP Kenton Boston for permitting us to use the Global TV studios in Toronto, Kingston, Ottawa and Montreal to record these narrations without charge. The advice & technical support that we received from the Corus / Global staff in all these locations was simply outstanding. A word of appreciation as well to Dinah Jansen, the station manager of the Queen’s University Community Radio Station – CFRC 101.9 FM – for helping us out at a critical moment so that we could complete the last of our audio recordings. 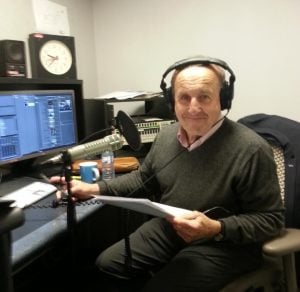 We are now on the home stretch. We have raised sufficient funds to build the core elements of the Memorial and for which building permits were issued. We still need to raise that last bit of money for the six VC walkways and to ensure that maintenance in perpetuity is guaranteed. But even that is off to a good start. If you wish to encourage your friends to contribute to this permanent memorial to a major event in Canada’s history please do so. 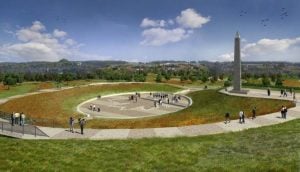 The Hill 70 Memorial team wish you and yours a happy summer vacation and hope you are keeping cool in this heatwave. Many thanks for your continuing support.