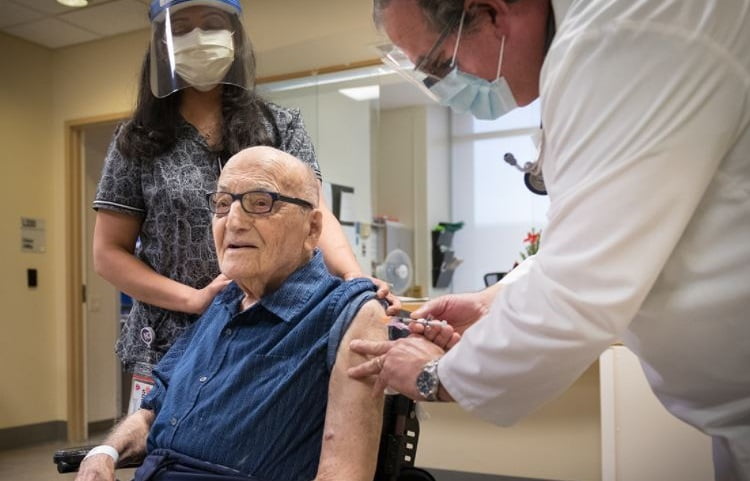 John Boyd, the oldest known Veteran in Canada, received his second dose of the COVID-19 vaccine today – from another Veteran.

A physician at the Sunnybrook Veterans Centre, and a Veteran himself, Dr. David Shergold administered the vaccine.

“No way!” responded John, a resident at the Sunnybrook Veterans Centre.

“Thank you for fighting this battle, this COVID-19 battle,” said Dr. Shergold.

“It’s an honour,” responded John. “This is not my first pandemic,” referring to having lived through the Spanish flu from 1918 to 1920.

“All of us on the team caring for Mr. Boyd are honoured to be a part of this special moment,” says Dr. Shergold, who served as a Naval Officer in submarines during the Cold War in the 1980s. “These jabs are our torpedoes!”

Born in Edmonton to Ukrainian immigrants, John has devoted his life to making Canada a better place. He grew up fighting against poverty, and during the depression, he took part in left-wing youth movements. Over the years, some of his many accomplishments include: