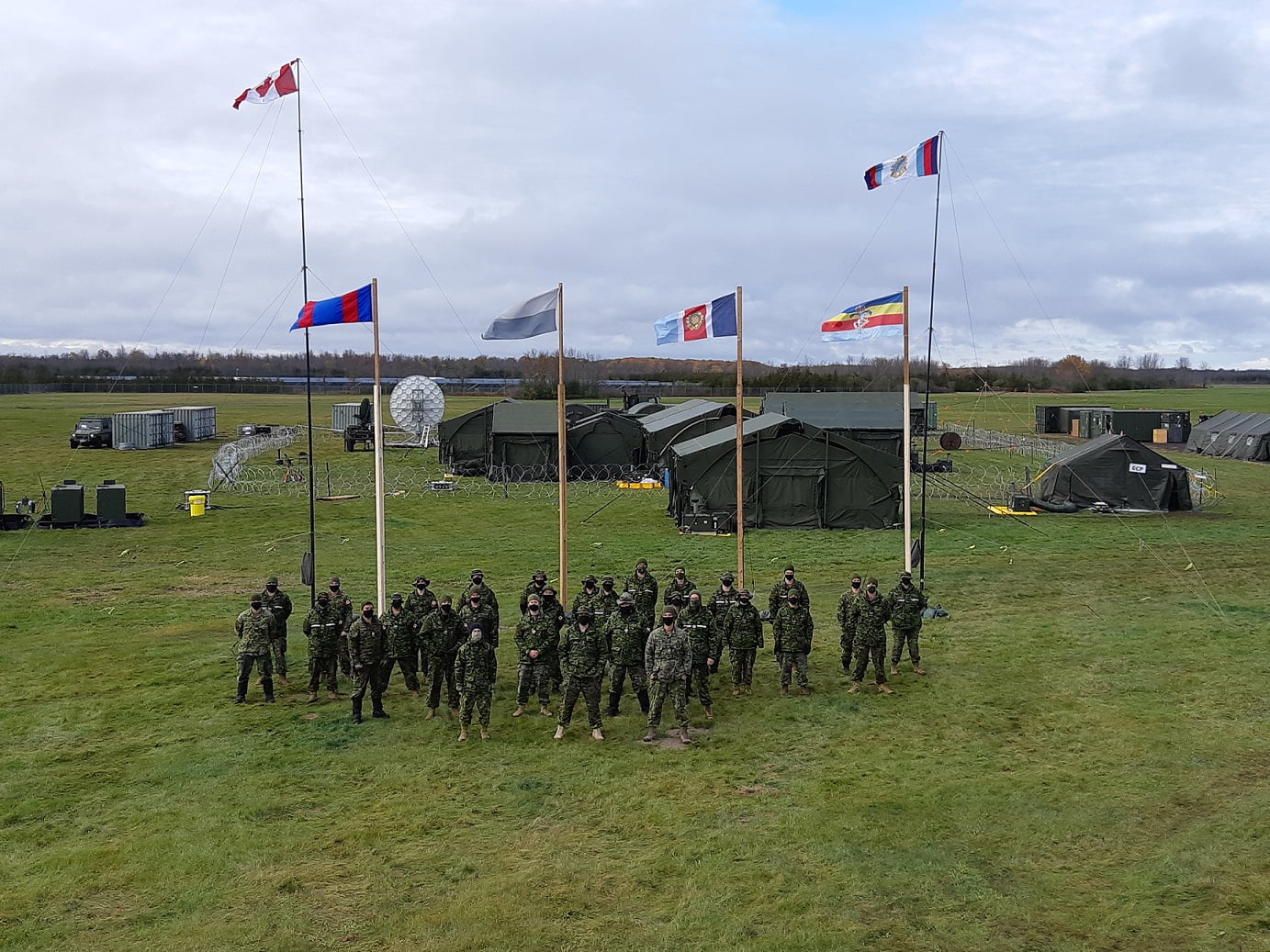 Ex READY POSTURE (RP) is the annual exercise conducted by Canadian Forces Joint Operational Support Group (CFJOSG). Its objective is to validate the formation’s readiness level so it can accomplish its domestic and expeditionary mandate by deploying a Joint Task Force Support Component (JTFSC). This year, Ex RP took place in Mountain View, Ontario from 13th to 30th October. The exercise’s main training objectives were theater opening and closing. This year’s pandemic context made this iteration of Ex RP uniquely challenging.

A primary component of any JTFSC is the Theatre Signal Unit (TSU) composed of personnel from Canadian Forces Joint Signals Regiment (CFJSR). The TSU this year was composed of 40 signallers led by Lt Allan Turtle.

The TSU’s primary Theatre Opening task is to build the command headquarters, this year employing the new Headquarters Shelter System (HQSS), and install and establish the link for all communication information system (CIS) equipment for overall command and control of the JTFSC. A main objective of this year’s exercise was to test the build times of the HQSS along with establishing and validating the JTFSC’s SOPs on building and operating a camp in a pandemic environment. Due to the physical distancing requirement related to COVID-19 nearly twice as many accommodation tents were needed to house the exercise participants and the HQ floor space had to be much larger than would normally be required in order to allow some respite from wearing PHM masks all day long.

Common CIS equipment used in the TSU consist of an MTST, LFPST, LCS kit and TLAN servers which provide DWAN, CSNI, and unclassified and secure VTC. The TSU was able to build a 3,500 sq ft HQ, install all CIS equipment, pull over 3,000 m of copper and fibre optic cable while still achieving FOC in 96 hours which is quite an accomplishment while living and working in austere conditions in the cold and wet of mid-October in Prince Edward County. 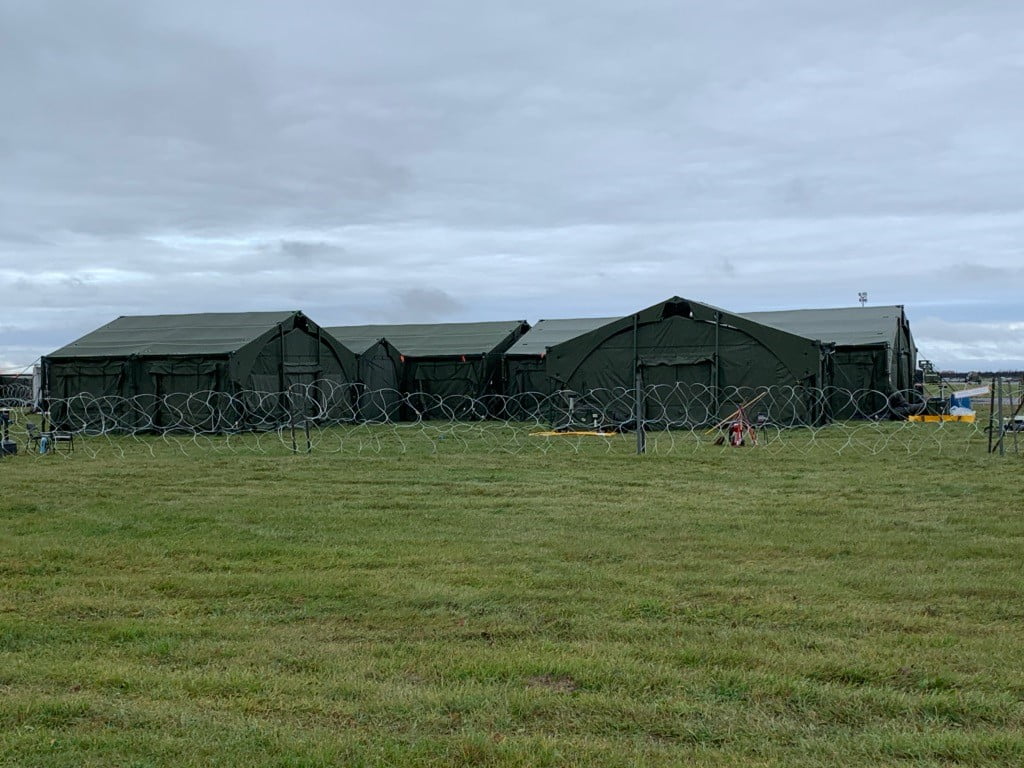 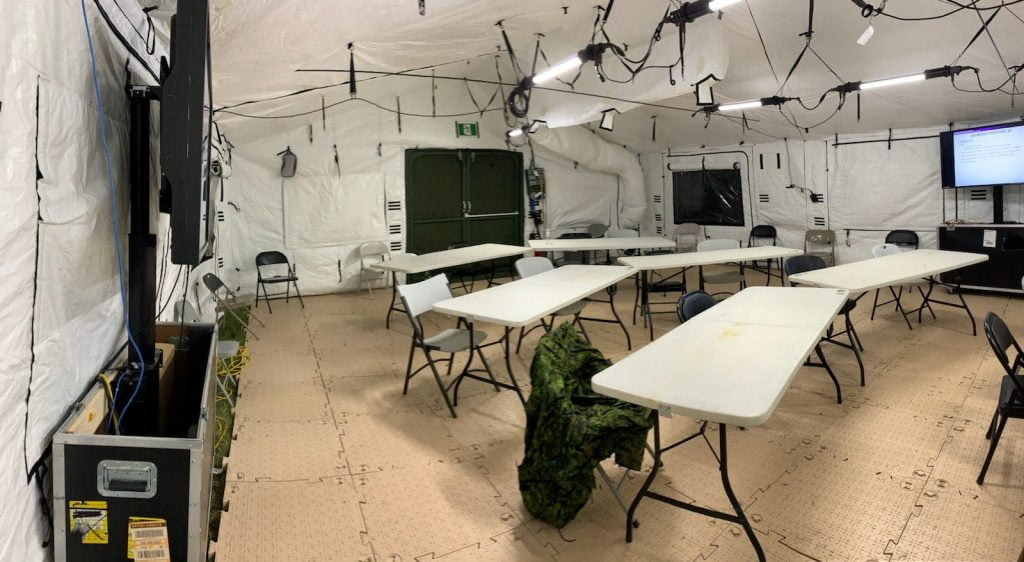 A look inside HQSS. Everyone notices it’s brighter and the ceilings are higher compared to what the CAF has been using. (photo credits Maj Richard)

This was just the second time CFJSR has set up the HQSS and the first time it’s been used in an exercise of this magnitude in the Formation. The next trial for the HQSS and CFJSR will be January in Petawawa during winter training at Ex ALPHA BLIZZARD.

For further information of the HQSS project, click the following link to the internet info page. http://www.forces.gc.ca/en/business-equipment/headquarters-shelter-system.page.