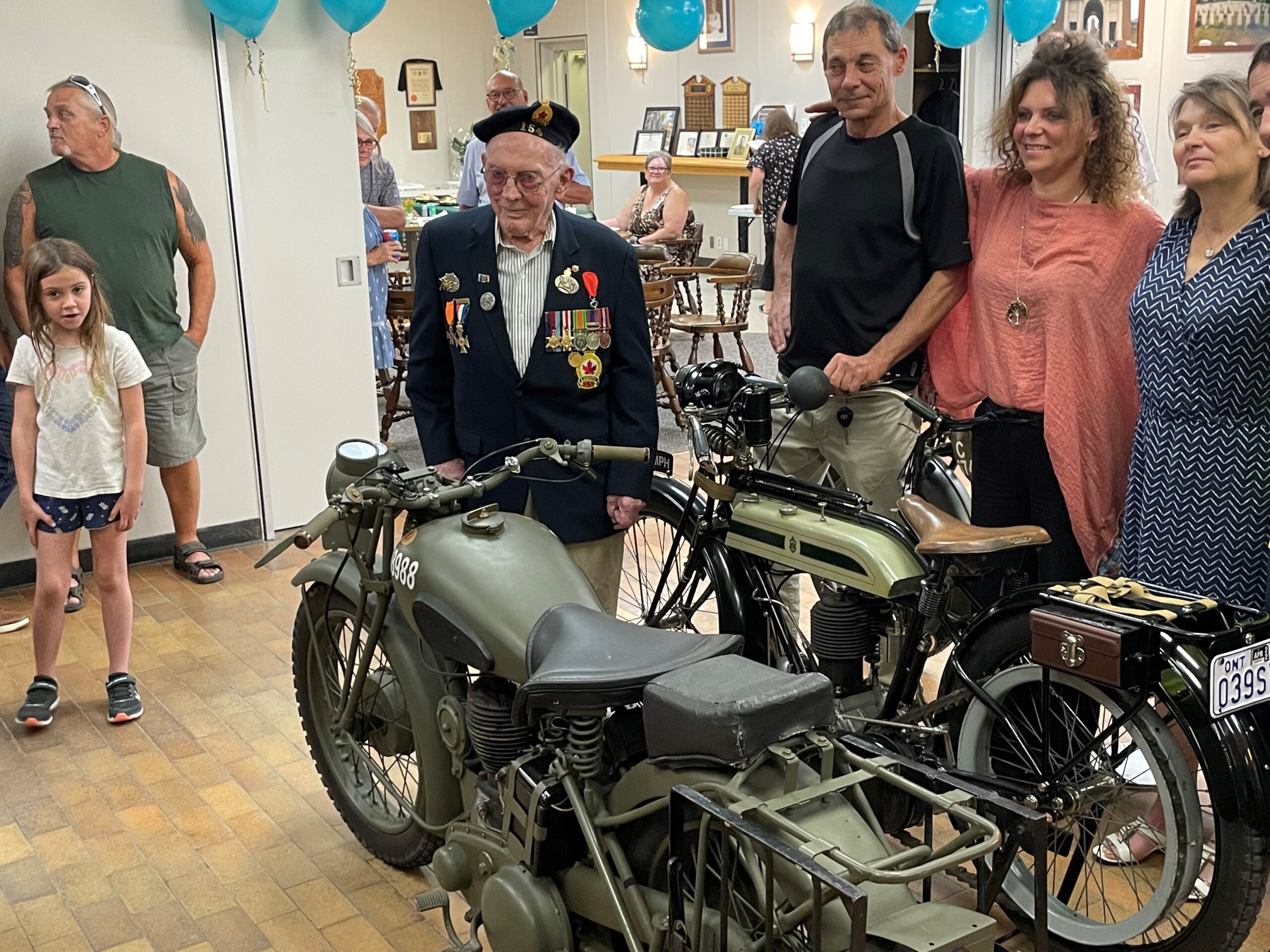 On 17 July 2022, family, friends including military family and friends gathered in the Legion in Caledonia to celebrate Cpl Patterson’s 100th birthday.  He enjoyed a few beer while exchanging stories and sharing a few laughs with over one hundred people who came by to see him.  He even donned his beret and legion jacket with his numerous medals that tell the story of his outstanding service to our country.

Cpl (ret) Hugh B. Patterson is a Veteran Signaller and Despatch Rider who served in WWII from July 1942 to January 1946 with 2nd Canadian Infantry Division Royal Canadian Corps of Signals.  He completed basic military training in Orillia, July 1942.  In September 1942, he completed Advanced Signals training at Vimy Barracks, Kingston, ON.

He deployed to Europe in December 1942, specifically to Cove Hampshire, England, Signals Holding Unit. He was part of D Day and followed 2nd Division through France, Belgium, Holland, and Germany. He was in Oldenburg, Germany on VE Day. He returned to Canada in December 1945.

His role was to deliver communications, orders, maps, messages, and mail to all the field formations in the 2nd Canadian Division. There were two daily despatch runs and occasionally, a special despatch if it was required. The field formations in 2nd Canadian Division where he delivered despatches included: 4th, 5th and 6th Infantry Brigades, 2nd Anti-tank Brigade, 3rd Light Anti-Aircraft, Engineering Company, 8th Recce Regiment, Medium Artillery, and Heavy Artillery. He made his despatch runs on a motorcycle and sometimes in a jeep depending on the situation and what was available at the time.  Some despatches required that he travel more than a hundred miles if sent to HQ. Other times, the distances were short, less than 20 or 30 km, if sent to field units.

Cpl (ret) Patterson was one of 7 Despatch Riders from his Section of 24 who survived enemy fire, shelling, and neck level garrotting wires set across dark roads. Often, reacting to enemy fire, ‘off-roading’ was a DR survival skill. He rode Norton 16H motorcycles from the D-Day beaches, through France, Holland, and into Germany. The Norton was a favoured despatch bike with its high ground clearance and its ability to survive being ‘ditched’ when diving for cover, riding between trees, or hauled through mud.  He is pictured on a replica of this bike below and in another standing next to it with his children by his side at his 100th birthday celebrations.

Cpl Patterson has our eternal thanks and gratitude for all he has done and continues to do for our great country.  Happy Birthday Cpl Patterson.  We wish you many happy and healthy years ahead.